Case for Jersey genetics has never been stronger 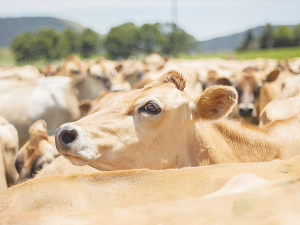 In a recent Jersey Advantage survey, 60% of respondents said they were planning to make breed changes to their herd over the next five years, with over half of those planning to increase their use of Jersey genetics.

Breeding and genetics are a long-term game and it’s three years from the time we make the choice around which straw or bull to use, until we really know whether it’s been a smart decision. So, it’s understandable that most farmers are thinking ahead when it comes to their breeding.

In a recent Jersey Advantage survey, 60% of respondents said they were planning to make breed changes to their herd over the next five years, with over half of those planning to increase their use of Jersey genetics.

It’s not surprising. With the resurgence of fat prices, the popularity of A2 milk, the growth in once-a-day (OAD) and variable milking routines, warmer temperatures and an increasing focus on efficiency and environmental footprint, the Jersey breed is well placed to meet the challenges of the future.

Jersey bulls currently hold 25/30 spots on the All Breeds Ranking of Active Sires (RAS) list which ranks bulls on their Breeding Worth (BW). BW is a measure of an animal’s ability to breed profitable replacements and the Jersey breed’s BW advantage is a reflection of several factors.

Breeding Worth is made up of eight traits – fat, protein, milk volume, liveweight, fertility, somatic cell count (SCC), residual survival and body condition score (BCS). Of those traits, Jerseys, on average, rate the best for fertility, SCC and BCS. Jerseys have lower protein and fat breeding values but when milk volume and liveweight are taken into account they are the most efficient dairy breed. In fact, studies show that Jerseys produce around 9% more milksolids per kilogram of dry matter eaten than Friesians.

The fat renaissance and the increase in variant component ratio – the value of fat relative to protein – has also helped Jerseys by increasing the economic value of the fat component which feeds into BW. The VCR used for BW is calculated on a five-year rolling average, and is currently 1:16 meaning that fat is 16% more valuable than protein.

There has been a fundamental shift in the consumer perception of fat and associated products which makes it likely that higher fat prices are here to stay.

But even if the value of fat were to reduce to 75% of the value of protein, Jerseys would still be the dominant breed on the RAS list.

Fertility is another area of advantage for Jerseys which have been shown to mature earlier and have the shortest calving to first service interval of the dairy breeds. This means they recover and cycle quicker post-calving, supporting higher submission rates and less intervention.

Jerseys also rate better for body condition score which is important because lost condition needs to be restored through either additional feed or a longer dry period than that required for an animal of a higher condition score.

Jerseys have a higher prevalence of A2 genes which helps farmers breed towards an A2 herd and the benefits that come with that such as milk premiums and increased demand for surplus stock. Of the top 25 Jersey bulls on the Ranking of Active Sires (RAS) list 84% are A2/A2 compared to just 36% of the top 25 Friesian bulls.

As summer approaches many farmers will start to reassess milking intervals and make plans around managing heat stress. These are both areas where Jersey’s excel.

The efficiency of Jerseys in a twice-a-day system translates to OAD milking regimes.

In addition to this Jerseys have also been found to experience lower levels of udder breakdown under OAD systems because of their higher milk concentration.

Jerseys also cope better in the warm, humid summer conditions. DairyNZ research shows that when air temperature is greater than 21ºC and relative humidity is greater than 70%, Friesians and crossbreeds begin to reduce their feed intake, and milk production is compromised. Jerseys are more tolerant of heat, with production losses insignificant until 25ºC.

The size of Jerseys and the relative stocking rate compared to a Friesian animal is often cause for pushback to using more Jersey genetics, but the liveweight gap has been steadily reducing over the past 15 years. Since 1995 sire proving data shows that Jersey liveweight has increased by around 30kgs while Friesian liveweight has decreased by around 15kg. The closing of the liveweight gap means that increasing the use of Jersey genes in your herd does not necessarily mean more cows need to be milked.

The case for Jersey genetics extends beyond just your AB decisions, to the use of Jersey sires for natural mating.

Jersey bulls are used extensively in yearling matings for their ease of calving and shorter calving to first service interval.

For those chasing extra genetic gain, the use of high BW recorded Jersey bulls over yearlings can be a good way of generating extra replacements out of your highest genetic merit animals without the additional work and cost that comes with a heifer synchrony programme.

Jersey bulls used to tail the herd can also provide a range of benefits. It’s common place to hear of situations where a mix of Jersey and beef bulls have been used to tail AB, only to find that come calving the majority of the calves born are Jersey sired. The work rate and robustness of Jersey bulls is second to none. As with heifer matings - quality high BW, recorded bulls are available and can generate additional replacement calves if AB doesn’t go to plan.

While the downside of Jersey bulls is the potential for more bobby calves, there is increasing interest in Jersey beef and an acknowledgment that coat colour and markings alone are a poor indicator of calf growth rates and profitability in finishing systems.

All in all, there are many reasons to use Jersey genetics in your herd.

Ultimately one of the challenges of farming is predicting and adapting to an ever-changing industry, but making decisions with efficiency, profitability and sustainability in mind is a good starting place. If you’ve ever considered using Jersey genetics in your herd, now is the time to do it.

The case for Jersey genetics has never been stronger.

Michelle Good is promotions committee chair at Jersey Advantage. This article first appeared in Getting the Basics Right 2021 edition.

Improving the reproductive performance of a herd by getting more cows in-calf is a key way to cut farm emissions says Stephen Sing, Jersey Advantage member.