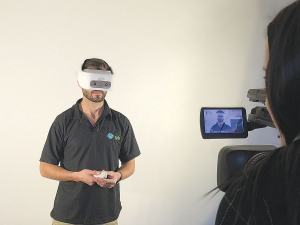 Independent Verification Services (IVS) in Hamilton has launched a new virtual reality (VR) simulation built by Hamilton software specialist Company-X. The Ministry of Primary Industries has approved the technology to be used in biosecurity refresher training.

“It’s the first training course that is not undertaken in a classroom, using a written examination-style assessment. Instead, it offers an online course with a virtual reality assessment that lets trainees demonstrate their practical knowledge and skills.”

The technology provides trainees with a realistic environment to properly assess their abilities to detect and respond to biosecurity threats such as foreign insects and vegetation.

A wireless virtual reality headset allows the person to walk around the simulated container externally and internally, in the same way that they would in the real world.

“The virtual reality tool is the closest and more realistic assessment of skills,” Webb said. “It replicates real-life situations that may be encountered on the job.

“We randomise all the different things that can happen, like poisonous spiders,” Bauerfeind said.

“We can trick head movements so we know where they are looking.”

“We chose to work with the team at Company-X due to their experience and capability. The fact that they are based here in the Waikato, was also a bonus,” Webb said.

The project, Webb said, was the first step in what could be a transformational journey for the biosecurity industry in New Zealand. It uses virtual reality to train staff dealing with biosecurity contamination immediately post-border in the most realistic way.

“This technology has the potential to be used to educate all New Zealanders to identify and respond to biosecurity risks,” he said.

“IVS believes virtual reality could be instrumental to achieving a biosecurity team of 4.7 million, where all New Zealanders are aware of the importance of biosecurity and involved in pest and disease management, as set out in the Government’s Biosecurity 2025 strategy.