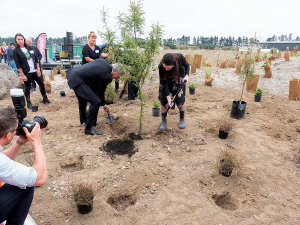 The programme is dubbed Whakapuāwai, which means “to cause to blossom, develop, flourish, prosper, thrive”.

Synlait says it is the company’s commitment to restoring and regenerating native ecosystems, waterways and wetlands, flora and fauna.

“It is about drawing people and groups together to improve water quality and restore biodiversity and re-establish mahinga kai – the places and natural resources that are culturally important to Māori and our community.”

Central to the programme is an industrial scale nursery to propagate native plants, on a 15ha site at the back of Synlait’s Dunsandel headquarters complex. It will be capable of growing more than one million native trees and shrubs annually, with the goal of planting four million native trees on farms and community land by 2028.

Over several years the site will also be developed with a wetland to handle waste water from the factory, walkways, exercise zones and meeting pods, and eventually an education centre for staff and visitors.

Adern congratulated Synlait on the initiative, saying the Government can only do so much.

“You are demonstrating true leadership. So I am here today just to acknowledge it and say thank you for working alongside us.”

She said she gets a huge amount of mail from children, the vast majority of which is about their fears for the environment.

Ten years ago, people questioned the science of climate change, she said.

“I remember it because I went to some political meetings at that time and I remember talking about climate change and being booed.

“We have moved a huge way in that time and now it’s not a question of if we do something it’s how fast and how far we go.

“We’ve set our goals that we don’t want to see warming go beyond 1.5 degrees in New Zealand, we’ve embedded those targets in our legislation, we’ve progressed a world-first agreement with our primary sector on how we will deal with emissions farm by farm and no-one in the world is doing that.”

Synlait staff will also receive one paid day per year to plant natives, in support of the company commitments to its farmers and communities to land restoration in Canterbury.

“We can’t solve environmental challenges on our own, but through Whakapuāwai we can lead by example and help connect our milk suppliers and community groups to make a real difference,” said Synlait CEO Leon Clement.

“New Zealanders are passionate about creating a sustainable future for our country, and at Synlait, we are in an ideal position to shape the change needed in our industry. It’s our purpose to do milk differently for a healthier world, and Whakapuāwai brings this to life.”

“Our customers, and their consumers, have rapidly shifting expectations when it comes to how we care for our planet, people and animals, and Synlait is responding to these demands to ensure a healthier world for all. It’s our business to shape a future that ensures agricultural and industry is fit for a better world.”

The programme was launched on the day Synlait also officially opened a new electrode boiler, the first of its scale in the country and the first since the company committed to building no more coal-fired plants.

The Government has set up a $500,000 fund to help farmers and growers recover from drought.

As a result of COVID-19, the world has learned to operate, communicate, and negotiate online.