Rotary meets all the needs 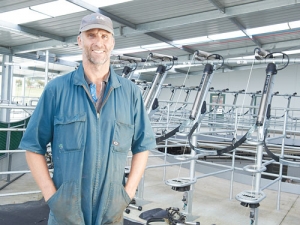 The shed, on an adjacent family property on the outskirts of Matamata, served two herds, “my brother-in-law’s which went through in the morning and mine in the evening,” says Jones.

“While this worked well for both of us, it wasn’t sustainable long term and so in 2014 we decided to build a 54-bail rotary on our 150ha farm.”

The existing herringbone was from Waikato Milking Systems (WMS) so the Jones knew the company, its products and service.  Jones says WMS sheds are known to be well designed, robust, easy care and don’t need much servicing.

“We wanted to have only one person in the dairy so we opted for a 54-bail Orbit rotary platform with SmartECRs (automatic cup removers) and SmartSpray (teat spraying).

“The new dairy was commissioned in November 2014 and we were pleased with how quickly the cows settled to the rotary platform.

“The new rotary has made a huge difference to the ease of running this farm.  The automatic cup removers and automatic teat spraying allowed one person to comfortably milk 450 cows for the balance of the 2014 season and it will easily handle 550 in 2015-16.

“You have high expectations of quality and service when you invest in a new dairy,” Jones says.  “WMS has delivered on both counts: their products are well designed, price competitive and robust.”