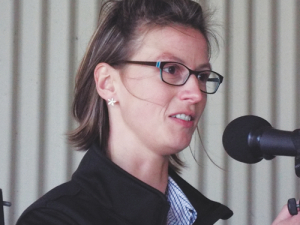 Owl Farm, a partnership between St Peters School Cambridge and Lincoln University, strives to demonstrate best practice in dairy farming and to encourage young people into the industry.

A recent open day reviewed the unit’s performance to date, giving a picture that reflected much of the central North Island’s weather – rain, rain and more rain.

The seasonal plan showed the enterprise had planned to cope with the worst while hoping for the best, but expectations went unmet because of the weather.

Since June the rainfall had totalled 620mm, versus 460mm in the same period last year; this amounted to 70% of the annual total. September and October records showed only 14 days without some precipitation.

Production was down about 5% on the same period last year, mainly because of the weather and the resulting inability to utilise high quality spring growth. This problem was compounded by the farm’s lack of infrastructure to feed maize silage, and the sodden ground conditions not allowing PKE to be fed in the paddock.

The ability to deliver quality pasture to the herd while practising good feed management was discussed in detail by Elodi Ganghe, feed and farm systems developer, Dairy NZ. She suggested that the difference in profit between ‘poor’ and ‘best’ pasture management could be as much as $300/ha.

Ganghe said the key to getting it right was the state of residual cover post grazing, which markedly affects pasture composition, the quality of future grazing and ultimately milk production. She recommended targeting residual cover of 1500-1600kgDM/ha, to control the development of reproductive tillers and seed head emergence which could affect future pasture quality.

Looking at trials at Scott’s Farm, Hamilton, and WTARS, Taranaki, which compared the recommended residual cover with one of 1800-2000kgDM/ha, also offered interesting findings. There was little difference in spring, but as the season progressed there was a marked drop in perennial ryegrass content and an increase in dead material.

Target residuals resulted in pasture with ME of 11.00, while the higher cover came in at 10.00. This saw daily intakes of 17kgDM and 16kgDM per cow, and resulted in production of 1.9kgMS and 1.5 kgMS/day/cow respectively.

Ganghe said good management resulted in quantifiable benefits if remedial action was taken to restore quality as the season progressed. If grass was getting ahead of cows pre-grazing, mowing could be used to control excess, and the same strategy could be used post-grazing to achieve targets.

Ultimately, if there weren’t enough animals available to eat the grass, best to remove excess for conserving as silage.

Dairy farmers have been turning to calf and bulk dairy feed to offset the wet spring conditions that have retarded milk production, says Ballance Agri-Nutrients.

“The lack of guts in the grass, coupled with growing dairy confidence, has ramped up demand for feed to build production as herds enter peak milk production,” says the co-op’s chief executive Mark Wynne.

He says the lift in demand has helped grow sales at the co-op’s animal nutrition subsidiary SealesWinslow to double the level of this time last year; a calf feed surge led the way.

“Every kilo at peak translates into 200L of milk for the year,” says Wynne. “We’ve seen a massive boost in calf feed sales to help develop rumen and get calves up to weight and onto grass; and there has been high demand for bulk dairy products to get cows to peak weight and in good condition for mating.”

Wynne says the industry’s optimism has resulted in farmers using 3-5kg of bulk dairy feed/head/day, up from 1.5-2.5kg last year.

“Feed demand is always a good barometer of how the sector is doing and this is a sure sign confidence is returning.”

SealesWinslow last year upsized its plant and increased the amount of raw materials and full time staff at its mills in Morrinsville, Ashburton and Whanganui.