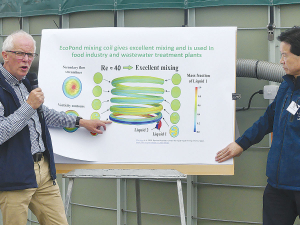 Ponds are the second largest source of methane on a dairy farm - behind direct emissions from the animals themselves - so Ravensdown says its EcoPond system could cut total farm emissions by 4% to 5%.

EcoPond is an offshoot of Ravensdown's award-winning ClearTech effluent recovery system, giving many of its benefits without the full cost of its holding tanks and associated machinery.

It was developed in conjunction with the same team of Lincoln University's Emeritus Professor Keith Cameron and Professor Hong Di.

The automated "plug and play" in-line system can be retrofitted to existing ponds and uses the same iron sulphate additive as ClearTech, metered into the pond by a computer-controlled pump and mixing system. To help ensure reliability and reduce cost, it uses the proven properties of liquid flow through coiled pipe to thoroughly mix the additive and effluent without any further moving parts. A raft-mounted sensor in the pond monitors and adjusts the mix in real time.

The system was unveiled recently at a launch at Lincoln University’s Dairy Research Farm, with speeches from a number of both Ravensdown and Lincoln bigwigs and a pre-recorded video message from Agriculture Minister Damien O’Connor.

Explaining the science behind it, Cameron told the launch that it was a natural process mimicking what happens in coastal wetlands.

“People could not understand why coastal wetlands had lower missions of methane than inland wetlands and it’s because of the sulphate in the seawater.

“Really, we’re looking at a nature-based solution following exactly what happens in those wetland soils.

“We’re stopping the methane at this point, keeping the carbon in the solution that gets returned to the pasture soil.

“So we’re returning, not only the nitrogen, the phosphorus, potassium, sulphur, calcium, magnesium copper, manganese, zinc etc, it also returns more carbon to the land because it’s not been blasted off into the atmosphere as the greenhouse gas methane.”

Hong Di added that EcoPond reduces the risk of Dissolved Reactive Phosphate loss to water by up to 99%.

“This means that this essential nutrient can be recycled with reduced risk of water contamination. The EcoPond system also strips out E.coli so that the dairy effluent is much safer to irrigate to pasture.”

The release of the science around EcoPond was “another big tick” for them, as it confirms that they are already getting the benefit of reduced methane from their effluent ponds, he said.

While ClearTech was primarily designed to recover and reuse water from effluent, many farmers didn’t need that. Ravensdown would continue to offer both systems.

At an estimated $45,000 to $49,000, Eco- Pond would be about a third of the cost of ClearTech and Ahlberg said there was a huge amount of interest in it already.

He noted that the country has now set a 12% target for biogenic methane reduction by 2030.

SIDE 2022 will offer a wide range of workshops which provide practical solutions to farming challenges and help farmers taking advantage of a rapidly changing farming environment.

Ravensdown is getting government co-funding to install a biomass combustor at its Dipton lime quarry.