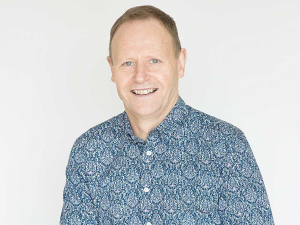 So says Lance Burdett, a former ‘top cop’ who is now a motivational speaker and author.

He says taking a break and getting off the property seems to be even more difficult for farmers now than ever.

And he is working with Ag Proud NZ, whose focus is the wellbeing of farmers and rural people. He will speak at seminars in Southland on December 5 and 6 (details in box below).

Said Burdett: “Farmers used to take a break, go into town, go to the market, see the rugby, have a few beers and be able to unwind. Those opportunities are now few and far between.

“Farmers are living and breathing their work. When things go wrong, they look out the window and what do they see? Their work.

“They’re finding it challenging to separate the two, or are reluctant to get off the property and have a break.”

Burdett worked in the police for 22 years where he specialised in suicide prevention and crisis negotiation, among other things. In 2016 he published a book detailing his police career: Behind the Tape, Life on the Police Frontline.

Then five years ago he started his own consultancy business called Wellness, Awareness, Resilience and Negotiation (WARN), coaching people how to cope with problems and challenges faced each day at work.

Burdett says he will encourage farmers to get off the property and take a break.

“I’ve got my own business but my home is not my work. With farmers, they are living right in the middle of their work. It’s hard to switch off.”

At the seminars he will share simple suggestions about removing the burden of work from home life.

“You can have one completely separate room in your house where you can talk about work, but not in the rest of the house.

“If you don’t have a room, you might have a chair you use for work, and a separate chair for relaxing. That’s the start to separate work from home.”

Taking a holiday once or twice a year is paramount, he says.

“We know most of our positive, long-term memories are tagged to holidays we’ve had in the past. That’s influential and can have an effect on our psychology and our physiology when we come back to work.”

He often hears farmers say they can’t take a break because they’re worried about who will manage the property while they’re away.

“Some say they can’t leave because they’ve got to milk twice a day. I ask, can they reconfigure their business to go to single-milking?

“Can they get a group of their neighbours together, so for one week a year the neighbours take over milking and they can go on holiday?”

Burdett says he uses only applied techniques and elements of neuroscience in his presentations.

It’s not just ‘Lance’s ideas’ but he doeds draw on his experience as a police officer and employs a fair bit of humour to connect with rural folk.

Lance Burdettgrew up in Bulls and went to secondary school in Hamilton. He was a builder until he joined the police at 35, looking for “an easier lifestyle perhaps working somewhere like Eketahuna”.

But he progressed through the ranks to detective-inspector. He also joined the Police Negotiation Team which led to his appointment as national advisor for NZ Police negotiations teams.

He also worked in the 111 police emergency contact centre managing police staff there.  The variety of his career kept him motivated but the workload was challenging.

“I had depression -- not taking leave when it was owed. But also the organisation would say, ‘you can’t take leave, we need you here’.

“Burnout took me to a deep dark place. So I stuck around, managed to work through it and then decided to get out and start my own business.”

Equipped with just a laptop and Powerpoint presentation, Burdett first got some work with ANZ Bank, coaching staff and offering advice on security.

Recently he has found his work in the rural industry rewarding and he has presented to other rural groups in Australia and Canada.

Now he sees his work with Ag Proud NZ leading to more opportunities to speak with rural people about wellbeing and “mind health”.

“I think there’s a disconnect between urban and rural people which Ag Proud wants to change.

“There are very few rogue farmers out there. Most are loving, caring people who just put on a brave face. They’ve been the heart of New Zealand for generations and we shouldn’t forget that.”

The seminars will be held on December 5, Croydon Lodge, Gore from 1pm-3pm and at the Makarewa Country Club, Invercargill from 7pm-9pm. Also on December 6, Rosebank Lodge, Balclutha from 1pm-3pm.