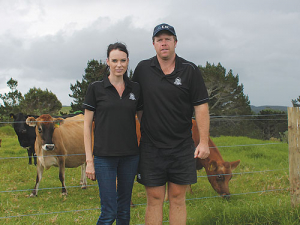 2018 Share Farmers of the Year Dan and Gina Duncan.

A total of 393 entries are in for the 2019 New Zealand Dairy Industry Awards.

“It’s a great result and we are thrilled with the response,” says Chris Keeping, the awards general manager.

“Changing the visa entry criteria has also seen an increase overall in entry numbers in the dairy manager and dairy trainee categories.”

Nationally, 106 entries were received in the share farmer category, 166 entered the dairy manager category and 121 entered for Dairy Trainee of the Year.

Keeping says this means strong competition in each of the 11 regions -- great for the entrants, categories and organisers.

Keeping says the regions worked hard to attract entries and she is rapt that all three categories will be contested in all 11 regions.

“Previous awards winners continue to make an impact in the industry and many are clear leaders,” she says. “All entrants can give themselves a huge pat on the back as they’ve taken an important step in enhancing their career and farm business just by entering the awards.”

Judging will begin in the new year for the 11 regional categories, with winners announced at dinners nationwide in March next year.

The 33 winners of those categories will then contest the national finals in Wellington next May.