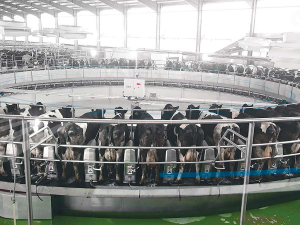 GEA has installed its DairyRotor T8900 on a Chinese farm milking 10,000 cows.

China's domestic milk production has received a boost with the installation of the country’s largest milking rotary parlour.

Lvyuan is China’s leading producer of raw milk; around 70% of milk consumed in the country is ultra-heat-treated (UHT). Demand for quality fresh milk is rising.

In a statement GEA says the milking carousel is also the first of its kind in the Asia-Pacific region.

It says the 10,000 cows will milked in multiple shifts, three times a day.

GEA’s head of service in China, Bright Xiong, says it was contacted by the farm owner Lu Guangqun when he decided to expand in Jiangsu Province.

“We suggested they consider the GEA DairyRotor T8900 rotary parlor. Even though it had not yet been released in China, Lvyuan agreed to become the first farm there to install one,” says Xiong.

Lvyuan ordered the T8900 at the end of 2019 and began production by the Chinese New Year in mid-January this year.

“A lot of communication was required. So much was happening in parallel and then during the holiday season as well, which made it challenging,” says Xiong.

“That said, all of the GEA teams worked extremely well together. To achieve what was in effect a turnkey installation in one month was extremely satisfying for all parties.”

GEA says farm owner Lu Guangqun reports that all basic milking functions are stable and the T8900 is working efficiently.

Domestic milk production is booming in China. Since 70% of the milk consumed in China is UHT, it can last for months on supermarket shelves.

However, there is increasing demand for fresh milk in China, therefore, manufacturers and processors are looking for local dairy farms that can provide high quality fresh milk rather than relying on fresh milk from overseas, including New Zealand.

Mark Smyth, head of country support, Greater China at GEA, says that a product like the T8900 fits the growing market perfectly.

“With up to 120 milking stalls this milking rotary parlour is especially developed for medium sized to large commercial farms. It is capable of operating effectively and reliably for up to 22 hours a day.

“Because the number of cows on these farms is so large and they’re milking the cows three times a day, the rotary needs to deliver uncompromising reliability – the T8900 does that.”

Smyth says there are many customers in Europe and North America who are already successfully milking with the T8900. “Now, GEA is beginning to roll out this parlour in Asia in the upcoming months, to meet the demands of the market.”