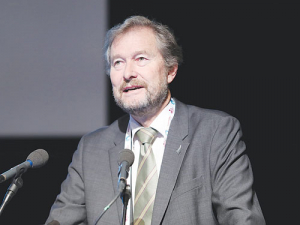 The UK is negotiating to exit the European Union and the dairy industry faces potential tariifs after Brexit; accessing non-UK labour after Brexit is also a looming issue.

Arla, a European dairy co-op, is jointly owned by 11,200 farmers in Denmark, Sweden, UK, Germany, Belgium, Luxemburg and the Netherlands.

An independent economic impact assessment of Arla’s UK business had shown that the company generated £6 billion gross value for the UK, and nearly 120,000 jobs, directly and indirectly.

Pietrangeli called on the UK government to publish its future plans for agriculture there via a parliamentary bill “at the earliest opportunity early next year,” adding that any delay would be detrimental to the industry.

“We need to have the best possible trading conditions with the EU; we need to get Brexit right. Trade with the EU is the most important market for UK dairy businesses and UK dairy should be recognised as a key player in Brexit negotiations.

“We do not want to see a situation where dairy businesses come under pressure because of restrictions on trading conditions.”

Pietrangeli highlighted the need for access to non-UK labour, citing the fact that 56% of farms had employed non-UK nationals in the last five years, as had 41% of processing businesses and 60-80% of third party logistics businesses.

“Don’t disregard dairy,” Pietrangeli said. “There will be opportunities from Brexit but we need time to adapt, assurance and our voice to be heard.”

David Walker, New Zealand’s ambassador to the World Trade Organisation, told the Summit that NZ had been agreeing to free trade deals since 1983 and also worked through the WTO.

He said NZ hoped to make progress on a deal with the EU and in the event of the UK leaving the EU, a deal could be arranged between NZ and the UK.

Michael Dykes, president and chief executive of the International Dairy Foods Association, told the summit that in the US “significant uncertainty” persisted over trade arrangements. He said a proactive trade policy is essential for the US.

UK and Irish farmers are united in their concern about the way the Brexit negotiations are heading, with a no-deal looking a real possibility.