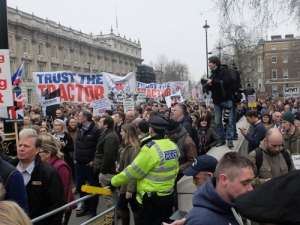 At least 2000 farmers marched in London last month to pressure the Government to do more to address Britain's agricultural crisis.

Coachloads of farmers arrived at Westminster for a march organised by campaign group Farmers for Action, which wants the Prime Minister to acknowledge that there is "a major problem" in the agricultural sector.

Low wholesale prices for goods including milk and cereal have caused income to plummet for many UK farmers.

According to Government figures, the average income of dairy farmers will have dropped by 45% in this tax year to £46,500.