Warlock offers a touch of magic 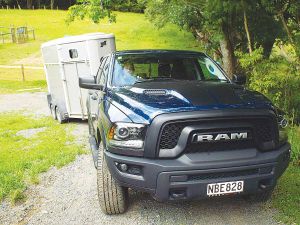 Having previously reviewed the RAM 1500 in 2020, we recently took the chance to get behind the wheel of the latest addition to the series - the RAM 1500 Warlock.

Far from a nod to Harry Potter, the Warlock is described by importer Ateco as "coming with some extra menace". For this, read darker shades of grey and black on the front grille, front and rear bumpers, fender flares and semi-gloss black wheels - rounded off with smoked headlight lenses.

The suspension gets a 25mm lift, not enough to increase ground clearance, but said to improve entry and departure angles, and making for a higher climb into the cabin - so thank goodness for the side-steps and grab handles.

The Warlock comes standard with the RamBox set-up - integrated lockers built into the side walls of the wellside. Offering 210 litres of watertight, lockable storage, these proved ideal for a "horsey" event in the North Waikato.

Also brought into play was the storage delivered by the tray itself, with everything kept secure and dry under a trifold tonneau cover.

Interestingly, a 200km round trip to said horse show really brought home just what the RAM 1500 series is all about. With the dark blue brute tipping the scales at close to three tonnes, pulling a horse float of around a tonne and shifting two nags weighing around 1.6 tonnes, the whole entourage weighed in at about 6 tonnes. One also needs "a lot of gear" to show horses, so I'm told.

Running solo, the big RAM delivered consumption figures of 12.8 litres/100km. However, adding the equine caravan - and taking on rural A roads and the Waikato expressway - the numbers only climed to 141/100km.

What really makes the Warlock so endearing is the relaxed manner in which it deals with big loads. Be that trailer, float or boat, it lopes along at low engine revs, eating up the kilometres in armchair comfort. And, of course, there is that addictive V8 burble.

A lightweight jump starter, developed by Projecta, does away with the need for traditional recharging and can be ready to start another vehicle just 40 seconds after use.