Hilux toughens up its act 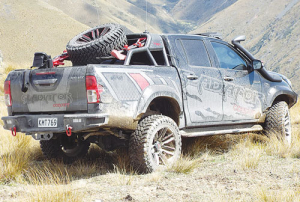 While the Toyota Hilux is the ‘go to’ for anyone looking for a no-nonsense ute, it’s probably been losing some ground to Ford and Holden.

The Hilux wasn't the blinged-up Ranger WildTrak and Colarado Z71 models that seem to catch the eye of downtown dwelling drivers.

This has prompted Palmerston North-based Toyota New Zealand to give the relatively new Hilux a refresh that sees the SR5 Limited discontinued, and the introduction of a brace of hero editions called Cruiser and Gladiator. This has come about asToyota NZ recognises that high-end models appear to make up about 30% of its competitors’ offerings, but SR5 only achieved 10% of the Hilux mix.

Also in the range offering, and because of the concept shown at the 2017 Fieldays in June, will be the Gladiator Series. The concept has uprated suspension, 20-inch alloys with mud terrain tyres, sump guards, bull bar, winch and futuristic graphics.

A range of Gladiator packages will allow customers to personalise their Hilux to their hearts’ content, with a stage one version offering a different front grille and bonnet lip, 20-inch wheels and all-terrain tyres, Gladiator-embossed upgraded seats and the graphics package.

Depending on the package selected, the price will increase by between $8k to $19k, which shouldn’t deter enthusiasts who already spend in the region of $3k on bog-standard machines anyway, purchasing tow bars, canopies and deck liners as a matter of course. Interestingly, Toyota NZ general manager of product Spencer Morris notes “we offer in the region of 300 different accessories, that delivers us about $30 million in business each year; but the record for a single vehicle accessory upgrade stands at a little over $31,000.”

Elsewhere in the range for 2018, which is targeted to deliver Toyota NZ 9000 sales, more models will be available with auto transmissions. Four of the nine 2WD variants and seven of the twelve 4WD models can now be specified with auto and this is likely to increase as customer demand changes from manual.

The company has dropped all three 4.0L V6 petrol models from the range, and the parent company will cease production soon because of reduced demand. Elsewhere, the range now offers a common 3.5 tonne towing capacity across the range of PreRunner and 4WD drivetrains, and the addition of a differential lock to the 2WD PreRunner format.