Weevil the answer to tackling horsetail? 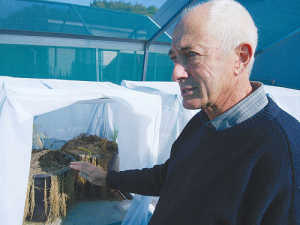 Landcare research technician Lindsay Smith with pots of Field Horsetail in which he is breeding weevils for a biocontrol project. The plants naturally die down in winter but these are hosting weevil larvae in the roots and are not expected to recover in Spring. Rural News Group

A recently announced grant from MPI’s Sustainable Farming Fund will pay for the next stage of a biological control project aimed at the invasive weed field horsetail.

A fern-like plant native to North America and Eurasia, field horsetail has seriously invaded pasture, crop and riparian areas in wetter regions of New Zealand. It is especially a problem around the Rangitikei region, but has been recorded widely in both islands.

Previous funding enabled the Rangitikei Horsetail Group to get the approval of the Environmental Protection Authority to release the horsetail weevil Grypus equiseti as a biocontrol agent for the weed.

Landcare research technician Lindsay Smith, who has been rearing weevils at Landcare’s containment facility at Lincoln, says the new funding will allow mass rearing of the weevils and their release into the affected areas.

Smith says field horsetail is a relative of various horsetail strains that were commonly sold as attractive ‘architectural’ plants for home gardens, but they are all now banned. The plant thrives in wet areas, particularly on the west coast of the lower North Island, and is now marching from waterways and into the paddocks.

“It can be toxic to stock, and that’s why we’ve got a chunk of money to work on it.”

It dies down in winter but grows back from an extensive horizontal root system which defies chemical control.

Smith says four different potential control insects were trialled. All were shown to be host-specific to horsetail, so would not damage wanted species, but three of them fed only on the fern-like stalks of the plant, and only the chosen weevil has the advantage of also attacking the roots.

Adult weevils are a small brown insect 4-5mm long, with a strong proboscis which they insert into the plant stalk, hollowing it out and killing it. Females lay eggs in the stalks and the larvae then eat their way into the roots where they feed throughout the winter, so killing the roots as well. Adults emerge from the ground in spring.

Smith says the first batches of his breeding stocks are now coming out of containment, and the first field releases will be next year – a year later than originally hoped for because fewer adults than expected had emerged this year.

The weevils, imported from Europe, have a relatively long lifecycle of about a year, which means it took longer to acclimatise them to the reversed seasons by manipulating light and temperature in the containment facility.

“We’ve had a number of shipments over the last couple of years of these guys. We’ve got pots galore inside containment, at various stages of winter and summer.”

Smith says the weevils will be released in batches of 100 or 150, preferably in spots where they can get established without being disturbed by grazing or other farm work.

“Like most projects, farmers will stand at the gate and welcome you in. They’re more than happy to try to make it work.”