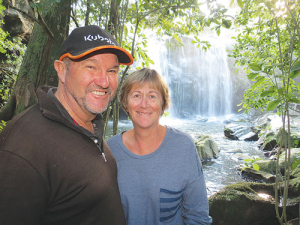 Alan and Helen Thompson say they are conscious of preserving and enhancing the environment.

In two weeks the supreme winner of the Ballance Farm Environment Awards will be named at a ceremony in Invercargill.

Among those contesting this award are horticulturalists Alan and Helen Thompson, who live 1875.6km distant from the Deep South in the winterless north town of Kerikeri. Peter Burke caught up with them.

Alan and Helen Thompson met at Massey University in the mid 1970s and have since created a huge legacy of excellence in their horticultural enterprise, notably turning a weed-infested gully into a beautiful eco walkway.

At Massey, Alan graduated in ag science and Helen in microbiology, after which he joined the Rural Bank. The couple then went into partnership on a Kerikeri dairy farm owned by his parents. The lure of kiwifruit, which was just coming into its own, was great and they joined forces with another grower.

“In partnership with another young couple we started growing melons which we exported to Japan for 15 years,” Alan told Rural News. “During that time we started a business growing lemons so we had lemons, kiwifruit, melons and satsuma mandarins; it all worked under the banner of a company which grew into Kerifresh Ltd.”

This business – large by Northland horticulture standards, with 300ha in production – was sold in 2008 to Turners & Growers.

They talked about retirement, but not for long, Alan says, deciding that horticulture was what they loved and knew; so with the interest they still had in two kiwifruit orchards they decided to start over again.

They set up a packhouse for the kiwifruit and again grew lemons and satsuma mandarins. Then they went a stage further, setting up a vineyard, Kainui Road, on the home block where they have lived for 27 years.

The grapes are planted around and below the beautiful home and from these vines they produce Chardonnay, Gerwurtztraminer, Pinot Gris, Viognier, Sauvignon Blanc, Rose, Tempranillo and Syrah wines.

The sprawling site had a natural amphitheatre where they built a stage for concerts and other functions.

Their son-in-law Gary makes craft beer which is sold at the Cellar Door, adding another dimension to their business.

In 2012, the Thompsons and their Hawkes Bay partner sold part of their interests in their export business Te Mata Exports to Market Gardeners Ltd, and two of their children now work for that company, exporting fruit.

Another daughter and her partner have just bought a mandarin orchard which they plan to convert to kiwifruit.

Effectively the Thompsons’ business interests have gone full cycle, but they show no signs of stopping.

They are big local employers with a permanent workforce of about 30 and 100 seasonal staff, many of them working in the packhouse.

Kiwifruit remains the mainstay of their business with 14ha in the new Sungold and 6ha still in green. They also grow satsuma mandarins and melons (4ha) in summer, and are developing their lemon orchard.

Alan and Helen Thompson have a lifelong commitment to the environment that has led to them winning the Northland regional final of the Ballance Environment awards.

In particular, Helen says, this pertains to the land below their house.

“We had a wetland, a horrible mess filled with wild ginger and every other weed under the sun. We embarked on regenerating that wetland area, planting about 10,000 native plants. As part of this project we have developed a walkway which people who visit the vineyard are free to enjoy. This goes across the wetland and winds through the bush to a picturesque waterfall.”

Now they are repeating this on another property near Kerikeri, Alan says.

“The stream flowing through this property connects up with another running into the river near the Stone Store, so the aim is to restore the wetland here. It’s important that the water from here, which goes down to the Bay of Islands, is as good as we can get it.

“We fish in the Bay of Islands and we see that after some of the deluges the water can be pretty murky. So any small things we can do to improve water quality will be good for the fish and us”

Helen says with children and grandchildren living in Kerikeri, they are conscious of the need to preserve and enhance the environment for future generations. In horticulture, now and in the future, she says, caring more for the environment will be an integral part of how the land is farmed.

Alan agrees, observing the media pressure on the dairy industry because of its economic need to intensify, caused not least by farmers’ indebtedness.

He notes the widening gap between town and country, this needing more effort to close.

Helen says there are people living around most of their orchards, who need to be informed about the orchard operations.