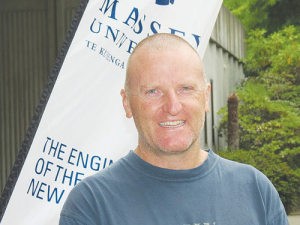 Recent bizarre weather – floods quickly followed by drought – has prompted a Massey University scientist to suggest that farmers may need to look at changing their farm systems.

Danny Donaghy, a professor of dairy production systems at the university, shared his thoughts with reporter Peter Burke.

The last 15 years have seen much more variability in climate conditions in New Zealand, says Danny Donaghy, who has a special interest in agronomy.

He notes this period has seen eight of the driest-ever summers and also the driest winters.

“We are getting patterns where there are warmer, drier summers while winters are also milder, so the rainfall has been compressed into springtime,” he told Rural News.

This has not been so in every region, he says, but freak conditions which see floods one month and suddenly a drought the next month are a challenge to farm management. And though the ryegrass species that forms much of the pasture in NZ is resilient to extremes of both cold and heat, the way it needs to be managed is not often to the liking of farmers.

“In drought, for example, we have to leave a bit of residual behind and we can’t let the animals eat right down to nothing,” he explains.

“That is pretty tough when farmers are possibly facing low milk prices and at the same time high feed prices. This is hard, given that we are saying ‘you have to leave something in the paddock if you want it to keep growing and avoid over-sowing the whole farm next autumn’.”

Donaghy, who comes from Victoria, Australia, says farmers there have much more water and feed storage facilities. While driving around northern Victoria around Christmas time he noticed huge barns full of hay and ‘turkey’s nests’ – above-ground water storage dams.

“Farmers [in Victoria] are more used to having to drought-proof their systems although they haven’t had to deal with excessively wet seasons – apart from western Victoria where the soils are bit heavier and the rainfall a bit higher.

“They have stand-off areas – be that a widened cambered laneway or an area of trees. They also have feed pads.”

Donaghy says while in NZ there are similar feed pads and stand-off areas, he doesn’t see the large-scale feed and water storage that exists in Australia.

Of new pasture species, Donaghy says regardless of type they all need rain, but some will survive better than others with less rain.

He says there’s been growing interest in a new species of red clover because it has got a tap root; new varieties of white clover are also more tolerant of heat.

“The old type of lucerne was grown just for hay and it didn’t handle grazing pressure. But we have a lot more species of lucerne now that can be grazed.

“Herb species such as plantain and chicory are obviously becoming hugely interesting to the industry; not just because of their ability to handle the dry conditions, but also – in the case of plantain – to reduce nitrate from the urine of cows.”

Donaghy believes the volatile climate conditions farmers have experienced recently sends strong messages: if spring is going to be more compacted, farmers should make hay while the sun shines.