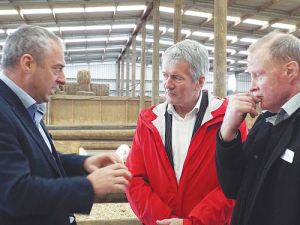 Agriculture Minister Damien O’Connor, out and about last month in Waikato, ended one day holding baby Neve — but not of Ardern-Gayford fame.

Neve is a dairy goat kid at Kerry and Robyn Averill’s farm at Tauhei, northwest of Morrinsville.

O’Connor was there with MPI director-general Martyn Dunne and directors of the Dairy Goat Co-Operative (DGC) to launch a new Primary Growth Partnership (PGP). Its aim is growing a sustainable, high-value goat milk infant formula industry in New Zealand.

Caprine Innovations NZ (Caprinz) is a five-year, $29.65 million PGP programme funded 40:60 by MPI and the DGC.

The aim is to improve the nutrition and health of families, raise research and farming capability, and increase export revenue in the goat milk industry to $400 million a year by 2023.

And he decried negativity about NZ’s agricultural sector, urging farmers and ancillary industries to start telling the many success stories out there in the primary industry.

The minister applauded the DGC that was founded in the late 1980s and now has 71 supplier shareholders producing over 100 products sold in 23 countries.

O’Connor praised the co-operative nature of the business, paying attention to its board whose diligence he said had led to its success -- an obvious having a dig at another dairy co-op’s board.

The dairy goat industry, according to 2017-published research by Massey University, says the national herd has 66,000 animals on 92 farms, 72% of them in Waikato.

The industry’s value is reckoned about $250 million, and the national herd will need to increase to 100,000 to meet the PGP’s growth target.

Kerry and Robyn Averill converted from dairy cows in 2005 and today milk about 1600 does at peak and 900 year-round to meet demand. Average production is about 120kgMS/animal/year. They also raise billy goats to 10kg for meat. All animals on the farm are housed indoors and fed a total mixed ration plus freshly cut and carried grass throughout the day.

“We recognise breastfeeding is the best source of nutrition for babies or infants,” he says. “But the programme will help meet demand where breastfeeding needs supplementation or just isn’t feasible.”

• Consumer research to understand the needs and communicate information to end users;

• Clinical research in infant nutrition which, while expensive, is necessary to provide reliable meaningful data to nutrition clinicians;

• Onfarm aspects such as environmental impact and optimum breeding and nutrition.

Martyn Dunne said the programme will bring many benefits, not least up to 400 new jobs, and grow NZ’s research capability, including developing a dairy goat research farm.

“The unique nature of NZ’s pastoral farming environment means that developments from the programme will be difficult to replicate overseas, ensuring benefits remain in this country.”

Processing issues with goats, but problems not insurmountable

Why have processor/exporters not encouraged more goat meat when it sells at comparable retail prices to lamb in USA?