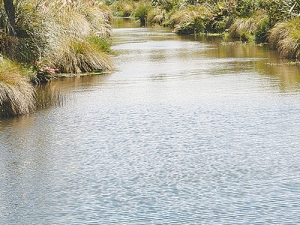 Gypsum can at least partially address many hydrological and chemical factors that influence the loss of phosphorus and other nutrients from farms to waterways, says a Canterbury company.

Centre for Sustainable Agricultural Technologies Ltd says gypsum has shown efficacy in phosphorus mitigation over a range of soil types and conditions.

It says attention should be paid to applying sufficient gypsum, allowing sufficient time for it to take effect, mimicking realistic rainfall conditions and to establishing sensible criteria for soil, slope and waterway characteristics when choosing appropriate study sites.

The company quotes Winstone, an importer of Australian gypsum, as saying the benefits of gypsum in soil treatment go beyond the above points.

Gypsum also helps mitigate the flow of nitrates and phosphorus in waterways and can be used to address the issue of sodium from applied effluent, the company says.

"Rates vary per farm and soil type; applications can last for up to three years and can be used as a base layer in stand-off pads," the company says.

Gypsum has long been used as a soil conditioner and fertiliser but only recently has gypsum's potential for reducing farm runoff to waterways been researched, says Centre for Sustainable Agricultural Technologies Ltd.

Such effects can reduce surface runoff volume by improving water infiltration into soil. Improved stability of aggregates reduces the potential loss of soil particles to waterways over and through soil.

A former placegetter in the Canterbury/North Otago region Dairy Industry Awards has come back to take out the top title this year.