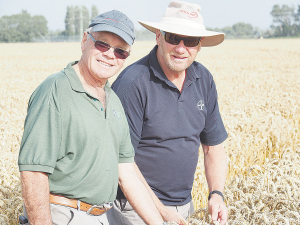 Bayer regional business manager for Mid & South Canterbury, David Weith, who handled all the agronomy for the record crop, praised Watson’s attention to detail and constant striving to improve.

“What he does differently to everybody else is attention to detail and his skill to get his timings and everything else right,” he told Rural News.

However, Weith says the game changer was the move to liquid urea – Watson introduced a 48m spray boom applicator to replace his 32m granular fertiliser spreader.

“In 2017, we had a beautiful crop but it was strippy and there was huge variation in yield between runs of the fertiliser spreader,” Weith explained

He says granular fertiliser is handled multiple times before getting to the farmer, making the pellets highly variable and difficult to get a consistent spread.

“The target audience [for fertiliser] now is the dairy farmer who is probably spinning to 12m – when cropping farmers are trying to spread to 24 or 32 metres and they’re just not getting there.”

Weith believes that Watson buying that sprayer and going to liquid meant it “evened the fields up dramatically.”

Watson told Rural News that the liquid sprayer produced an even spread, and even quite high winds didn’t distort the pattern at all.

“That’s a huge advantage in Canterbury,” he says.

Watson also added that it had also been a very good arable season.

“It was probably one of the best we’ve had for years, not too hot and just dry enough.”

Watson did not want to rest on his laurels after the 2017 record.

“We saw ways in which we could make improvements and achieve an even higher yield.

“By trying new cultivars, switching to liquid nitrogen and monitoring plant health more regularly we were able to achieve another incredible result,” he says.

“Because of the high wheat yields we can grow on our farm, we are pleased if we see yields increase year-on-year by 100-200 kg/ha. So, to beat my last crop by almost 600 kg/ha exceeded even my hopes.”

Watson’s advice to other farmers is attention to detail and making sure all the inputs are right, while being careful not to overspend.

Planted in April 2019 and harvested on February 17, the wheat variety used was Kerrin, primarily a stock food variety, bred by KWS and supplied by Carrfields Grain & Seed.

David Weith says when he started in the industry, a normal wheat yield was about 4t/ha.

However, he believes a visit by some UK farm consultants to NZ 15 years ago turned it on its head with new methods around sowing and controlling diseases and pests.

Now, most people are “relatively satisfied” to achieve 12t/ha on irrigated land, while some get a little more.

“But the average is still around 12 tonnes,” he adds. “To me, we shouldn’t be happy with that because we can make a hell of a lot more money out of cereals if we get into yield, because yield is king.”

“Our aim is to assist New Zealand to sustainably become the highest yield producing country in the world.”

Four kiwi arable farmers were amazed recently to see the immensity of the cropping industries in western Europe and Ukraine.