Farmer group is all action 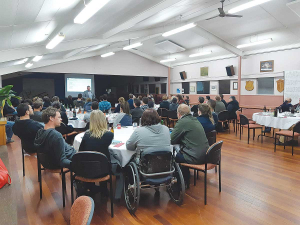 Joel Fraser, who farms sheep, beef and deer on 850ha 30km northeast of Taumaranui, says his joining the group soon led him to make small, but important, changes to his farming processes.

Fraser learned about the RMPP Action Network from Rabobank and found plenty of interest among other farmers locally.

“There are a few guys around this way of a similar age and situation to me, so we talked about it and thought it sounded like a very good idea,” he said.

“It’s been great and pretty useful to just get off the farm and meet up with people, and get useful information at the same time. So far we have mainly looked at farm management practices.”

Anna Cuming and Paul Brough, who are Rabobank agribusiness managers in Waikato, were the connectors who contacted farmers to float the idea of joining an Action Group.

Cuming keeps on at the group meetings.

“I cover a large area as part of my role with Rabobank, so I knew a lot of people in the region,” she said.

“Paul and I got in touch with some local farmers and organised a meeting to tell them more about the RMPP Action Network.

“Quite a few of the younger group knew each other already. A number of them are farming on family land and have similar issues they want to deal with. They challenge and encourage each other well with a lot of banter.”

Rob Macnab, a director and consultant with Total Ag, agreed to facilitate the groups.

“He has been proactive with the group,” Cuming said. “It is an added benefit that he has an established network within the agriculture industry which has helped him source the required subject matter experts, often at short notice from around the country.”

The group early on completed its required extension plan and members are working towards completing their KPIs. It is also working on environmental policy for each farm.

“Their farms are in difficult locations for an environmental plan, with lots of creeks, rivers and valleys,” Cuming said. “They are very forward thinking, looking at things like solar powered water pumps. They are very hungry for knowledge.”

The group started early last year and meets every couple of months, fitting around the demands of work, so more frequently in winter.

“That workshop was run by Beef + Lamb NZ (B+LNZ) and a risk management expert, which the group found useful.”

Most of the group members did not have H&S plans prior to the workshop, Fraser says.

“It was very good. We got the folder from B+LNZ and realised that 80% of it has been done for us. What most of us still needed to do were our hazard identification plans, and we left the workshop knowing how to do that. I’m working through mine and the plan should be completed within the next couple of weeks.”

Cuming says the RMPP funding has been useful.

“It means the group can bring in experts.”

The Red Meat Profit Partnership (RMPP) Action Network programme has been extended until early next year.

Red Meat Profit Partnership (RMPP) Action Group facilitator John Stantiall was unsure, at the start of the Covid-19 lockdown, how meetings could work.

At least 50% of New Zealand farmers identify succession planning as an issue for them, their family and their farm business.