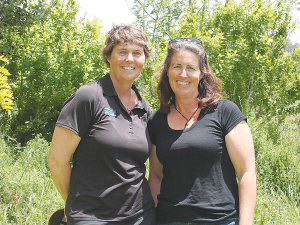 Her advice to young people wanting to go 50/50 sharemilking is, to do one year of contracting milking first.

“Contract milking teaches people how to become self-employed, to run their own businesses in a relatively simple way and a semi low-risk way,” she told a SMASH field day, near Wellsford.

It gets people into “the zone” and teaches the farm and business skills, doing a budget and possibly employing people for the first time.

Robinson outlined some thoughts on what makes contracts work well or vice versa.

A contract milking agreement is not an employment agreement, but an agreement between two parties.

If both parties agree, you can have any agreement you like. She says farmers and contractors should firstly get an up-to-date copy of the Federated Farmers’ contract.

“You don’t have to stick to everything in it but it is a very good agreement.”

“It is about 50 pages and most people get to about page 25 and give up, but they should read it right through.”

Communication is number one, says Robinson.

“By this I mean formal communication, not just casual discussions at the milking shed or on the motorbike or tractor,” she explained.

“You need to sit at a table together once a month and have a chat.  Talk about how things have gone in the last month, think about what is coming up in the next month, make a list of what needs to be done and who is going to do it….

“It is simple and it will take care of 95% of problems.

“Have a pen and paper and write a few things down.”

Robinson says she hates dealing with trade-offs when a farmer or contractor pays for something that is not in the agreement and it is not formally sorted out. She says they should invoice each other each month and sort it out each month. Otherwise it can turn into a nightmare at the end of the year.

Even if the contract milker is under financial pressure it is better to invoice them monthly so they know what they owe.

“A farmer may want to give them a bit of relief in, say, August when not much money is coming in. But they should not add it up then present a big bill in November.”

She says an invoice each month, even if they don’t require payment then, will allow both parties to know where they stand.

Alternatively sometimes a farmer owner doesn’t agree with what’s being done but says nothing.

“And the contract milker says to me ‘I wish he would tell me what he wants’,” said Robinson.

When signing the agreement it needs to be clear how much input the farmer will have. A new contractor will need more.

“Make sure you talk about it before you start being realistic and stick to what you have said.”

Contractors need to be honest about their skill level and take into account different types of farms.

“Asking for help is better than stuffing things up and then seeing the farmer lose trust in you.”

Robinson says these are particularly important for farm owners who live on farms.

“Identification and minimisation of hazards is a joint responsibility.  So as a farm owner you can’t say, ‘well it is not my fault that the contract milker’s worker drove into the tree stump in the long grass. As a farm owner you should have got rid of that hazard to start with or at least minimised it, which means put a fence around it or similar.”

Robinson says farmers have an onus on them to make sure a contract milker is acting in a safe way. Unsafe practices should be raised at monthly meetings.

Getting a good contract in place

Usually a farmer wants to take on a contractor so they can step back from day-to-day management and not have to employ staff.

“This means that someone else has to do that and you have to pay them the right amount for doing that,” Robinson said.

“It is not just another labour unit. You want to somebody to take that stress off you and do all those jobs.  They need to be rewarded accordingly so you would expect to be paying them more than just a normal farm wage.”

She says an agreement should always include a budget for the contract milker showing an estimate of income and expenses based on actual farm figures.

Robinson advises to be realistic on milk production -- not too conservative or optimistic.

For the contractor, what they can earn is all about cost structure, not necessarily earnings per kilo. When asked the rate for a contractor she says anything between $0.80 and $8.80.  One of her highest earning contract milkers ever was on $0.80 a kilo, but he had few costs and high milk production on a flat farm.

If you make changes by agreement or renew the agreement everything needs to be recorded.

When preparing a contract, if you are financially tight as a farm owner, you can help the contract milker with their budget without it necessarily costing money. For instance, you could do the relief milking, rear calves or give them calves.

Discuss how supplement costs will be handled. This can cause tension in, say, a bad autumn when the farmer would prefer to dry off but the contractor wants to feed palm kernel to keep milking. You could have an agreement of, say, a normal year limit of 120 tonnes and after that the contractor pays 25%.

Negotiate on other variables such as calf rearing, labour, feed costs, runoff management and machinery available.

Boosting the revenue on a smaller farm

Lisa Groen is gradually taking over the reins of the family farm, near Te Aroha, Waikato, ten years on from starting to learn the ropes.

Keith and Tracey Crawford began their dairy careers with big dreams of farm ownership, then still a highly achievable goal for a determined young couple.

Overall the dairy industry is more professional and in a good space, but volatility will continue, says James Allen, retiring AgFirst chairman.

Despite a rise in payout and profitability, dairy farmer confidence in Waikato and Bay of Plenty is relatively subdued.