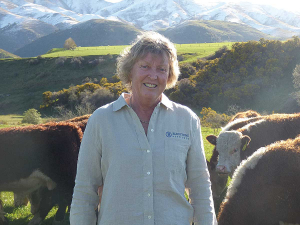 They run Bluestone Herefords, 30 minutes inland from Timaru, on 600ha of tussock and rolling foothills, ranging from 300-550 metres altitude. The South Canterbury farm will mate about 300 cows this season.

Yvonne, once a police officer, manages the farm day-to-day while Ben, formerly a lawyer, runs an animal health firm in Timaru. As stud owners, their cattle genetics are based squarely on client demand, typified by a growing call for cattle with low nitrogen output.

Three years ago, the Lees began working with CRV Ambreed on genetic improvements to reduce farming’s environmental impact. Studies into N flows show about 20% of nitrogen in urine ends up being leached into groundwater and some also ends up as the greenhouse gas nitrous oxide.

Lincoln University researchers recently reported that cows with genetics for low MUN excrete less urinary nitrogen and that these low MUN cows have more nitrogen (protein) in their milk and faeces.

It’s a win-win for farmers and the Lees wanted to be part of this gain.

Even though milk urea is difficult to measure in beef cattle, urea spreads quite evenly between three pools in the animals – milk, blood, and urine. Therefore, Blood Urea Nitrogen (BUN) levels are expected to give the same information as MUN levels.

Yvonne says Bluestone Herefords data suggests that animals do differ genetically for BUN. Further, animals with breeding values that are low for BUN tend to have higher breeding values for 400-day, 600-day and maternal liveweight traits.

“This indicates that animals with low BUN may be partitioning dietary nitrogen from the urea pools (milk, blood, and urine) and into growth, a real win-win situation. We are very pleased with this outcome and further trials are underway,” she says.

At the next Bluestone Herefords Bull sale, on October 7, there will be five bulls whose breeding values for BUN are significantly below average and these will be marketed as the ‘green bulls’

Yvonne is pleased the stud initiated this project three years ago and looks forward to delivering this as an additional tool to maintain the sustainability of NZ pastoral farming.

“A low BUN animal will use the protein it receives in a more efficient manner because less is going into urine and more is going into meat.”

He says they targeted dairy clients from the outset, aiming for low birthweight and short gestation, then breeding out horns from progeny of dairy animals.

“We keep looking for what our customers will want in 10 or 20 years’ time, so that’s why we’ve moved into this environmental space.”

The Lees have been providing CRV Ambreed with Hereford semen for the past seven years and they try to offer their customers new products each year.  This year, all of Bluestone Herefords’ semen for the Fertabull product is homozygous polled, ensuring the resulting progeny will be born without horns.

“And in future it might be all low-BUN as long as it keeps all the other characteristics,” Ben adds.

He’s confident there won’t be a genetic trade-off in pursuing low BUN.

“A heavy, short-gestation calf isn’t any good, but a low birthweight, well-growing, good carcase, short-gestation animal is good. So, you’ve got to try and get all the elements together, not just focus on one aspect.”