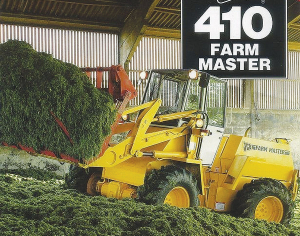 Loading shovels from JCB have a reputation for getting the job done, so they’re a familiar sight on silage stacks and a key tool in many agricultural contactors’ armoury.

That’s no surprise, given JCB’s 50 years of manufacturing history.

In the late 1960s, JCB bought Chaseside Engineering, Lancashire, and its range of seven machines, and by 1969 the first JCB loading shovels were being made at Rocester in Staffordshire.

In that first year, the division built 298 machines which were sold in the domestic market.

Fast forward 50 years and now many thousands of machines are made at plants in India, Brazil, China and, of course, at a dedicated UK factory at Cheadle which this year celebrates its 20th anniversary.

The first JCB designed wheel loaders arrived in 1971. The 413 and 418 models had a cabin mounted on the forward half of the articulated chassis to give the operator the best visibility.

In 1987, JCB moved into the compact loader sector with the 406 machines, the first with the cabin located on the rear section of the chassis.

A major re-design of the heavy loader range in 1984 ushered in the 411, 412S and 416 units which prefigured the range seen on farms today. This contains machines for all applications -- from the compact 403 (only 26kW) through the mid-range 411 Agri.

The larger heavy duty machines include the 417 Agri, through to the flagship 457 Agri with impressive statistics such as a 20.5 tonne operating weight, a 193kw MTU engine, 5-speed ZF transmission and 323L/in oil flow.