No tractor drivers, no problem 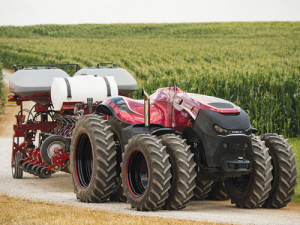 Automation seems to know no boundaries and the latest manufacturer to show its hand – CNH Industrial – sees self-driving tractors as the future for boosting production and improving productivity.

Unmanned machines make better use of available labour, CNH says; they work unmanned around the clock, integrating with existing fleets and using artificial intelligence to automatically respond to predicted weather.

Configured in two layouts, the Case machine has no cabin, while the NH has a conventional layout. The latter is said to offer more flexibility, for instance, allowing the operator to drive on the highway or in intricate tasks that do not suit automation. Other than the ‘clever stuff’, both tractors use standard engines, transmissions and chassis.

Control is via a fully interactive interface, with the inputting of field boundaries as the starting point, followed by path plotting to achieve the most efficient route for the tractor. The company suggests, at this early stage, the technology best suits tasks needing little operator intervention such as cultivation, planting and spraying.

Once field plotting has been completed, the user chooses a job from a pre-populated menu, selects a vehicle, picks a paddock and starts the procedure – all inside 30 seconds.

When in work, the tractor/implement can be monitored from the office or via a remote tablet, which both receive live camera feeds from up to four cameras to show progress. This includes readouts for fuel or seed levels, implement readings such as seeding rates or coulter downforce displayed in a secondary screen.

In work, LiDAR (range finding lasers) and video cameras detect obstacles and effect avoidance, alerting the operator by audio and visible means of an impending collision and giving a choice of manual avoidance, controlled from base, or path re-plotted by the system. If fuel or seed run low, an on-screen alarm is activated and the machine stops, for safety, if no action is taken.

As work progresses, tasks can be modified at any time, and built-in connection to weather satellites can allow the machines to decide to stop work then start again when the bad weather has passed.

The system allows multiple tractors to work individually or in tandem in the same paddock and to do tasks in sequence.

The concept is envisaged as workable, eventually, on grass and cereal harvesters, self-propelled sprayers and support vehicles delivering seed and fuel.

CNH Industrial has made its first 3-D printed spare parts, showing the farm machinery industry to be right up with emerging new technologies.