No downfall for Nemesis 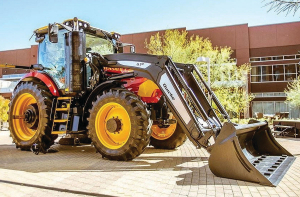 Versatile’s new Nemesis tractor is out to make a name for the company.

Its D100 of 1966 was the first equal size-tyre ‘artic’ produced, then became the seed for many other manufacturers to develop machines of a similar format.

Versatile had chequered ownership over the last 30 years: it was sold to Ford New Holland in 1987, then passed to John Buhler in 2000 then the Versatile name disappeared.

The company is now owned by Rostselmach, of Russia, which since 2007 has brought some stability to the brand and now makes large articulated machines — wheeled and rubber tracked. The latter is called Delta Track with power outputs from 375 to 605hp.

The company also builds a range of front wheel assist (FWA) tractors from 265 to 400hp.

The latest model from Versatile was recently shown to its North American dealers in the form of the new Nemesis series with models in the important 175-220hp segment.

Designed and built in Winnipeg, Canada, the new models, like all other Versatile, uses a 6.7L Cummins power-plant likely to be available eventually up to 250hp; this is mated with a ZF-sourced synchro/powershift transmission. That will be followed by a CVT unit in 2020.

The tractor is said to have the largest cab in the sector.

Loaders are supplied via a relationship with Alo, the parent company of well-known brands Quicke and Trima.

Interestingly, the Nemesis series is expected also to be re-branded and sold as a high horsepower model for Kubota, whose expansion plans include offering a wider product range.

Nemesis was the name of the Greek goddess of vengeance, this name signalling Versatile’s commitment to customers after suffering the largest losses in its history in 2018.