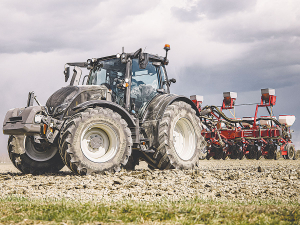 Valtra recently announced upgrades to its N and T series tractors, with new models already rolling off the production line.

With new models already rolling off the production line, expect to see redesigned cabins alongside new transmission and engine features.

Undoubtedly the standout in the cabin is a new right-hand A-pillar display that replaces the traditional instrument cluster found behind the steering wheel. The new full colour display offers default information such as forward and engine speeds in is upper section, while the lower portion is reserved for menus for the tractor and implement control.

The same display can also be used on HiTech and Active models to control engine, hydraulic and transmission settings. On Versu and Direct models, it can work in conjunction with the SmartTouch system to divide tasks to the driver’s preferred location.

Elsewhere in the cabin, a new steering column – with easier height and rake adjustment – supports a larger steering wheel. The forward/reverse shuttle lever has been redesigned to make directional changes easier and also incorporates the park brake system. The new system also makes it easier to switch between using the standard shuttle and the SmartTouch control lever.

In the case of the SmartTouch models, the right-hand side of the cabin has been redesigned, allowing the seat to swivel to a greater angle. The Evolution seat also incorporates a swivelling backrest to offer better support when the operator is looking at rear-mounted implements.

Offering the latest technology, both the N5 and T5 models can be specified with Valtra Guide auto-guidance, Task Doc and Section Control management options.

A new Auto U-Pilot function combines with Valtra Guide to take control of the implement during headland turns, freeing up the driver for other duties.

70 Years in the Making

Over the years, it evolved into a manufacturer that offered a point of difference by working very closely with its customers. Today this sees the company with its Unlimited Studio customising 1 in 3 of all tractors that come off its production line.

To mark the 70th Anniversary, a specially-equipped limited edition of the T series models is being offered worldwide. Featuring a deep red, metallic paint finish, reminiscent of the original Valmets of 70 years ago, the red theme is carried into details like the stitching of the leather upholstery and the interior lighting.