MARS – not out of this world! 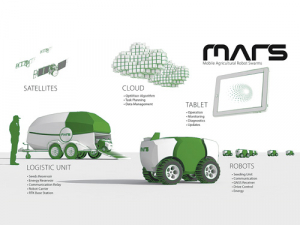 Many tractor manufacturers are talking about autonomous operation, most going about it by modifying existing products.

High-end German tractor builder Fendt looks to be taking a different route: it sees fieldwork of the future being done by multiple robots

Its MARS (mobile agricultural swarm robots) project proposes units working around the clock at high levels of precision and with much less labour onfarm. The company also believes that by using multiple small robots the system would offer more flexibility and allow adaptation to changing conditions or situations.

Early trials are centred on the planting of maize crops in a project being partnered by the University of Ulm and funded by the European Union Open Robotics Development Programme.

The vision sees field robots being transported to a work area by a logistics unit -- a perhaps autonomous trailer or transporter carrying seed, fertiliser and recharge facilities for the robots.

Field units would be battery powered and run electric drive systems, resulting in lower tare weights with the benefit of being able to operate under conditions not suitable for conventionally based machines.

Robots would do the seeding, and be able to adjust seed rates and sowing patterns and record data for proof of placement.

Control would be via an app, used on a tablet or mobile device, allowing control away from the work site. After inputting data on field location and size, setting seed rates and sowing pattern, the system would calculate the time required to complete the task and allocate the appropriate number of robots.

Robots would be able to communicate via a cloud-based system in conjunction with GPS to provide detail such as geo-coordinates of each seed planted, and should a unit break down send a message to the logistics vehicle to organise a replacement.