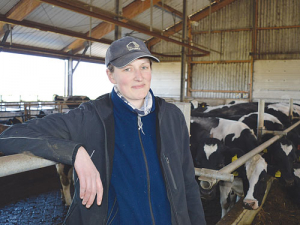 The power of cooperative agriculture is proudly on display at a dairy farm near the German city of Dresden.

The Agrargenossenschaft Gnaschwitz (Agri Co-op), in the town of Gnaschwitz, milks 460 cows year round with eight Lely robotic machines.

The co-op is owned by about 100 shareholders, each owning a small parcel of the farm. Following the reunification of Germany in 1990, land seized by the former communist regime in East Germany was returned to people if they could show evidence of their family’s ownership.

However, members of Agrargenossenschaft Gnaschwitz found little use for the small parcels of land they received so they decided to form a co-op and start a dairy farm.

The co-op holds an annual shareholder meeting and profits are paid out as dividends. Day-to-day operation of the farm is overseen by a board of directors.

Shareholder and board member Lisa Russig hosted visiting journalists at the farm earlier this month. She says maximising milk production and increasing shareholder returns are the main objectives of the dairy business.

Russig says when the old barn needed replacing six years ago the co-op board visited other dairy farms in Denmark, Netherlands and Germany to explore options. The co-op was at a crossroad – whether to continue milking in a refurbished old barn or build something new.

The new barn can house 590 cows, but now milks 460 cows daily; the others are either dried off or calving.

The milking cows are in four groups, each group milked on average 2.5 times a day by Lely A4 robots. Each cow produces about 36L. The milk is sold to German processor Muller for 29 euro cents/L plus an extra 1.5 euro cents/L bonus for milk quality.

European dairy processors have been hit hard by Russia’s ban on dairy imports. Russig expects the milk price to fall further in the coming months.

Cows are calved in groups and hand-milked by bucket milkers for the first few days. Calves are taken to the old milking shed now used to house young stock. Cows are eased back into the milking herds.

Russig says milk from the Lely robots can either go into the main storage tank for collection by Muller or a smaller tank for feeding calves. Milk not suitable for collection is dumped on the farm.

Effluent is scraped and then injected into paddocks using a tractor and slurry tanker.

Cows are fed twice a day, barn feed accounting for 26L/cow/day. Feed concentrate given to cows in robotic machines provides an extra 4-5L of milk per cow daily.

- Graduated in agri economics and management at the University of Dresden.

- The co-op also owns a grains business and sells raw milk on the farm and in the city.

• Sudesh Kissun flew to Dresden, Germany as a guest of Lely.

Lely has launched a sprayable barrier against bacteria to boost the udder health of cows.