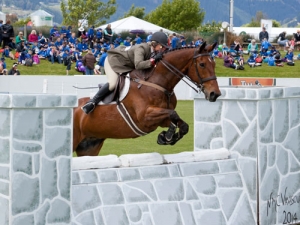 The Canterbury A&P Show will host a Royal A&P Equestrian Event in 2015, giving competitors the chance to win prestigious Royal ribbons and medals at the annual show.

Livestock and equestrian entries officially open for the 153rd Show on August 1. Every year around 3000 animals are entered into 1700 classes ranging from costumed Arabian horses to Piedmontese cattle and Red Boer goats to soft feather Bantams.

"Hot on the heels of increasing entry numbers by 10% in 2014, Royal Event status will further grow what is already the second largest equestrian event in New Zealand."

Canterbury A&P Association president Nicky Hutchinson has been a competitor and volunteer in the equestrian section since the 1960s, and is excited to be hosting the Royal Event in her presidential year.

"We have aspirations to one day host the Royal Show here in Canterbury again, so in the meantime it's fantastic to be able to give our competitors the opportunity to compete for Royal ribbons and medals again."

"We're looking forward to delivering a fantastic event in 2015 not just for the competitors, but also for spectators by attracting some of the best competitors and horses in the country."

RAS president John Grigg is looking forward to working with the Association on the Royal Event.

"It's a particularly good fit with the current president, Nicky Hutchinson, considering her equestrian interests. Canterbury has always had a very strong equestrian presence within the showing movement and this will be complemented by Royal Event status.

"It's one of the most prestigious medals within the organisation, and along with the tri-coloured ribbon it's sought after by competitors."