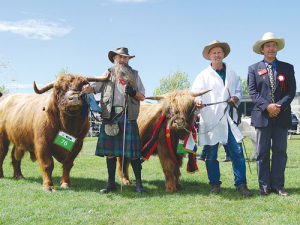 The Canterbury A&P Association has released a list of protocols to enable cattle to be displayed at this year’s show.

The Canterbury A&P Association (CAPA) has released a list of protocols to bolster biosecurity for the New Zealand Agricultural Show. Junior classes will continue, but only with yearling animals, not calves.

Even the simple act of the judges draping the winners’ ribbons over winning cattle is to be banned. Instead, they will pass the ribbons to their handlers, and will also be banned from touching animals’ heads or muzzles.

Other measures in the show ring include a strict 2m space between parading animals and a one-way traffic system between the ring and the cattle pavilion.

In the pavilion, empty pens and plywood panels will create buffers and barriers between animals from different herds. There will be separate dairy and beef washing bays, each run on a roster system and rigorously disinfected.

Extra staff will be on hand to manage cattle, with strict requirements for proper paperwork and no late entries accepted.

The show vice-president, North Canterbury cattle breeder Chris Herbert, said there had been no known infections from nose-to-nose contact between neighbouring herds so the actual risk of transmission was extremely low. But the new protocols are to give exhibitors confidence to attend.

“I’ve had exhibitors ring me since that information went out and they’ve said ‘we weren’t planning on coming but if you’re going to put these protocols in place, actually it will be OK, we will come’.”

The banned calf classes usually attracted only 10 to 15 entries. Herbert said they were often hand-reared pets and lifestylers’ animals, and it was “just too hard” to be sure of their histories.

Beef cows with calves at foot would still be allowed.

Herbert said he did not expect cattle numbers this year to “break any records” but Canterbury was usually the country’s biggest cattle show and he expects it to remain so.

CAPA in a statement said that the risk is minimal because M.bovis needs prolonged exposure to spread.

“We feel this is the time to ensure standards at shows across New Zealand are reviewed and raised to allow this great agricultural tradition to continue in a safe and responsible manner. We expect these regulations to bolster the future of the show and we will keep working with MPI, and other shows, for improvement.”

Entries are now open; the show will run at the Canterbury Agricultural Park from November 14 to 16.