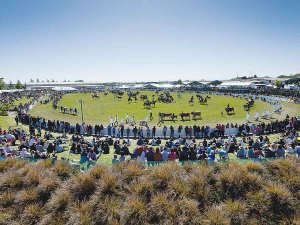 The cancellation of this year’s show joins other key agricultural events that have been cancelled this year due to Covid-19 such as National Fieldays, Central Field Days and the Young Farmer of the Year.

It is the first time the event has been cancelled since World War II. The Canterbury A&P Show Association says there was financial uncertainty for the event due to the COVID-19 outbreak.

“If we continued to prepare for the show and find out the month before we are unable to run, then the association would be bankrupted.”

The association says this led it to finalise a decision of …“sacrificing this year’s show to shore up its future.”

It says its first objective, as a charity, is to protect its financial position “at all costs” to ensure the show could be held in the future.

The association says it has reduced event management fees by over 75% and “scaled back the operation to ensure we avoid bankruptcy” – but it had not been enough.

“Unfortunately, this does not insulate us from the significant loss we have already experienced due to the fact we will not have revenue from a 2020 show to cover the work done between December 2019 and May 2020.”

the future of the show

“is not out of the woods yet”.

The Canterbury A&P Show Association has launched a fundraising campaign, warning its long-term future is “at significant risk”.

The loss of the show, which is held each year in November alongside famous NZ Cup horse racing events, will be a major blow to the Canterbury region.

It joins other key agricultural events that have been cancelled this year due to COVID-19 such as National Fieldays, Central Field Days, Young Farmer of the Year, and a myriad of other rural happenings.

Show chief executive Geoff Bone says they   will be refunding all site fees.

“Even though we’ve spent a lot of money on the event already, it would be morally wrong to hang onto them.”

This stance is in contrast to the National Fieldays, which has only offered to give back its exhibitors 80% of their site fees for the cancelled 2020 event.