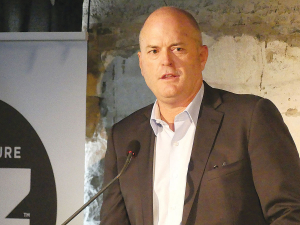 Read: Kiwis need to grow up when it comes to conversations on water quality, says Muller.

Muller believes there needs to be a deep conversation about water and the place it has in the NZ economy as well as the strategic pre-eminence it gives us over our competitors over the next 20 to 40 years.

He says whenever we talk about water storage in this country everyone thinks you are just talking about irrigation and land use change.

“Actually it is the enabler of the decarbonisation of the economy,” he told Rural News. “It needs to be seen through a much broader lens and I want to be somebody who puts voice as to what that might look like.”

Muller says one of the problems with the discussion around water is that it has been focused on how to deal with problems within catchments – rather than a wider view and asking how water can be used strategically to unleash the economic horsepower of the country. He says NZ needs to reduce its dependence on fossil fuels and focus on renewable energy.

“The best way we can do this is to store water and use it more strategically,” he says.

Muller reckons there also needs to be a conversation on land use. He says, at present, land-use change is being driven by a rush to plant trees to avoid the liability in terms of CO2 emissions.

“The incentives we have in place at the moment are perverse. They are driving change of land use by encouraging people to put strong performing sheep and beef units into trees because of the future carbon benefit,” Muller told Rural News.

“People should invest in trees because they can see the value in the Chinese market in 20 years; not because the government might give them a unit that might hold a bit of value in the short-term. I think those incentives need to be seriously looked at.”

Muller says in the coming year he’ll be advocating for a core policy of land use flexibility where market signals allow people to make their own decisions on what to do with their land.

“Any idea that this should be dictated to by the top (government) is wrong,” he says.

Muller also wants to see a change in the way farming is portrayed.

He wants to orientate the approach to farming through celebrating the sector as opposed to condemning it and says he has very strong views on this subject.

“The Labour party in particular all the way back to Lange (former Prime Minister) hold the view that agriculture is a sunset industry. They see the NZ economy as having to diversify away from its historical dependence on agriculture and primary industries in general. I think it infuses the way they think and underpins their ideology,” he says.

Muller says he completely rejects this philosophy and his approach this year will be to re-orientate that conversation.