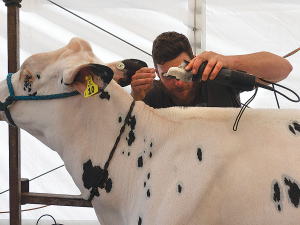 Not this year! Cattle fitter Brett Barclay is all concentration as he prepares an animal for the dairy ring on the first day of the 2018 New Zealand Agricultural Show in Christchurch.

Cancelling the New Zealand Agricultural (Canterbury A&P) Show for the second consecutive year because of Covid is devastating to many people. Immediate past president and committee member Chris Herbert says it is the country's largest A&P show and a traditional highlight of the Canterbury calendar. Around 100,000 people normally attend the show.

Herbert says he worries that it may begin to lose the support of the public.

"We don't want people to find other things to do and not come to Christchurch Show Week," he told Rural News.

"It's a social catch up, for a lot of stud breeders it's the shop window for their breeding, showing off what they're doing, for others it's just a hobby. And that's just the exhibitors and the people that are involved in it."

A&P Association board chair Stewart Mitchell announced the cancellation last week, saying the Government's vaccine certificate plans for major events will be too late to save the show. It was to have been held from November 10 to 12.

"We're hugely disappointed but we have no option, given that there's no indication when we will come out of Alert Level 2. We simply can't have large crowds accumulating and enjoying the show as they normally do," Mitchell said.

In August, the Christchurch City Council approved a $1 million loan to the A&P Association in case of cancellation and Mitchell says it will now have to draw down some of that loan to cover incurred costs.

There will be a series of smaller events and competitions, but with no public attendance.

Rangiora Lowline cattle breeders Philip and Kay Worthington are hoping the online show can be developed into a more comprehensive event with social media presence.

Philip Worthington agrees there is a danger of losing the public.

"And that's why we're looking at trying to get a bit more onto social media, to try and oull them back in," he told Rural News. "It is true that we run the risk of just dropping them off altogether, which we don't want to happen."

Worthington says last year's one-day cattle event - with exhibitors and handlers only and no public attendance - was "actually quite successful." But he says it was also very costly because of the need for exhibitors and animal to travel and stay one or two nights at the Canterbury Agricultural Park.

Meanwhile, other shows around the country have also had to cancel, including the Northern A&P show, which was to have been held at Rangiora at Labour Weekend.

Warrick James, who was the Canterbury show president in 2016, agrees that it was "just too risky" to proceed with this year's show. However, believes the public will contine to support the show when it returns.

"Yes it's a concern but it might work the other way - they may say, 'oh gosh we haven't been to a show for a year or two'," he told Rural News.

"When we do have a show it'll probably be a damn good one, I would think."

For more than a decade, the Worthingtons have collaborated with Rangiora High School to offer on-farm training in cattle safety, breaking-in, handling, showing and judging.

The students help prepare and parade their Lowline cattle as well as competing themselves in handling and judging classes.

"We'll have about 14 young people in the Young Handlers and Herdpersons and Judges classes," Worthington told Rural News. "We have been able to work it so that our judge on the day will actually hold a small tutorial afterwars to try and freshen them up on things she thinks they're a bit light on."

He adds that it's a learning experience as much as anything else.

"But we had actually been counting on this to get our animals ready to go to the Canterbury Show. Because if they get a show under their belt beforehand those yearlings are a lot more manageable."

Agricultural and royal shows across Australia received a much needed funding lifeline of A$25 million from the Government.

There are 580 ag shows held in Australia each year, providing a significant contribution of over $1 billion to the Australian economy. Around 6 million people attend an ag show each year.

"The financial support announced by the Australian Government will enable ag shows to plan and implement shows in 2022 and beyond," Agricultural Shows Australia chair Rob Wilson said. "The funding will give local communities, show societies and stakeholders the confidence to proceed with their shows for next year."

Competing in the livestock contests at the New Zealand Agricultural Show is not for the faint-hearted.

The plastic sheep that became famous around Christchurch city after the earthquakes have slowly started going to new homes.