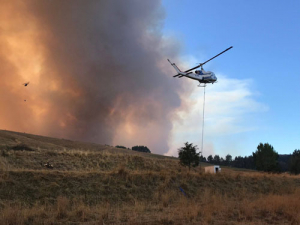 The Ministry for Primary Industries and volunteer groups have come together to protect animal welfare in the Tasman District fires response.

Through MPI, SPCA National Rescue Unit, Massey University, HUHANZ and others have held a significant field presence throughout the response.

Yesterday, MPI reached 700 animals at the Richmond Showgrounds in the care of MPI, SPCA, HUHANZ and other volunteers.

MPI says its 0800 number has so far received around 130 calls, all of which have been followed up and had a call back where needed. MPI is addressing the highest priority calls first, and then following up with people as possible.

MPI aims to phone every property owner in the area but is currently prioritising known animal welfare concerns, or the areas where they have not yet been able to check behind the cordon.

- MPI is providing regular updates about the animal welfare response to the Tasman Fires on its website, here: www.mpi.govt.nz/tasman-fires

- The Rural Support Trust is also available to support farmers, growers and others in the rural sector. They provide free and confidential support, advice and referrals, including with health, finances and more. RST can be contacted on 0800 787 254.