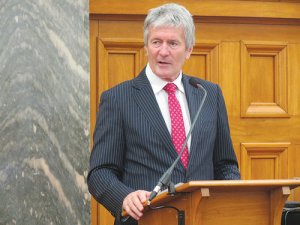 MPI’s latest quarterly report on the outlook for the New Zealand primary sector says the industry’s exports performed better than had been expected during the year ending June 2019.

It says the increase is being driven by a strong production season and another increase in dairy and meat prices.

“In 2019, we expect horticulture to be the fastest-growing sector. Improved growing conditions (compared to 2018) for the last harvest led to higher yields of kiwifruit and most other horticultural products,” the report says.

“Dairy export revenue is forecast to increase 5.5% from last year to over $17b in the year to June 2019, building on gains in the previous two years.”

“This news will be welcomed by many, especially in light of the significant challenges the sector is facing, with dryness being experienced in many in rural areas — especially the drought-affected top of the South Island — fires in Tasman and the cattle disease Mycoplasma bovis.”

O’Connor says this performance is even more impressive considering a more modest outlook for the global economic environment and high uncertainty generated by trade tensions.

“Import demand from China continues to strengthen for most primary industry products, and exports to the US are still higher than historic levels,” he says.

- Forestry exports to now increase by 7.0% to $6.8b due to stronger harvest volumes than previously

- Demand is expected to remain steady over the next year, with an expected increase in Chinese residential construction despite the weakening Chinese economy.

- Wine and apple and pear export revenues are expected to increase by 3.9% and 11.5%, respectively.

- A positive long-term outlook for arable exports, with moderate price and volume growth.