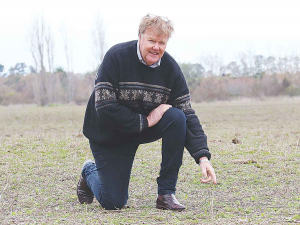 Lochie MacGillivray says there has been an improvement in conditions in the region with recent mild weather, soft rain and a “phenomenal” pasture response.

Lochie MacGillivray, who works for AgFirst and is also the chairperson of the Rural Advisory Group set up to help manage the drought recovery, says there has been an improvement in conditions. He says Hawkes Bay has had mild weather and soft rain, and the pasture response has been phenomenal.

“Typically, at this time of the year, farmers might think of having 9kg of dry matter growth, but right now they are getting between 12 and 14kg of dry matter,” MacGillivray told Rural News.

He says farmers will still have to conserve feed for their animals, but the good weather has enabled pastures to recover and shortened the time between now and the end of winter.

“Usually winter is a dormant period and we are not expecting to get much from it. But there are a number of green feed crops that have been sown and they are responding really well,” MacGillivray says.

“Often when they are sown late we don’t see a huge amount of growth from them and generally the feed available from them doesn’t come until August. But the growth we have been getting is two or three weeks ahead of what we would have normally expected.”

MacGillivray says the rain had really lifted the morale of farmers, but they are aware that spring is still some weeks away.

“When we do the numbers, we still see a huge feed deficit across the region that’s going to have to be filled somehow. Either by using more supplements, the use of more nitrogen or by taking it off the back of the sheep or cattle – meaning lower animal weights.”

As the rest of the country starts to recover from the drought, grazing stock in other regions becomes a possibility. But MacGillivray says in Hawkes Bay, stock numbers being carried though winter are down by 30%. He says a lot of the trading stock has gone, as has capital stock and replacements such as hoggets.

“Personally, I don’t think we have seen it at that level before.”

He says many beef farmers in the region completely destocked, but once the pasture covers improve they will be looking for stock again. MacGillivray says, at present, the beef trade is potentially good for many farmers, but he adds that the longer they delay the decisions to get back in, the more expensive as prices in spring will be high.

Lochie MacGillivray has been reminding people that there are three phases to a drought.

He says the first is the actual event itself, which is driven by soil moisture deficit. The second is where things are at right now as everyone tries to get through winter.

“The third phase is getting business back to usual and that’s going be tough,” MacGillivray told Rural News. “For some farms, that will take years. The worst possible scenario would be back-to-back droughts. The long-range weather forecast, thankfully, does not predict that this will happen.”

As a consultant, MacGillivray says he’s been busy helping farmers put feed budgets together and, along with other rural professionals, generally helping farmers make it through to spring. Farmers in the Tukituki catchment have the added stress of having to apply for consents to farm.

MacGillivray says farmers recognise that they have got environmental responsibilities, but says the consenting process is costly and time consuming.

“Unfortunately, this arrived at the wrong time for them when they have got other cashflow requirements and are so busy feeding out. It’s not that they don’t want to do it,” he says.