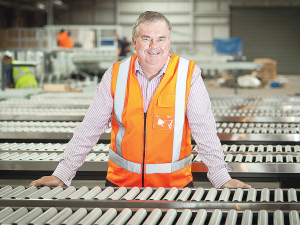 The post-harvest provider’s net profit for the year ending December 31, 2018 topped $9.8 million, versus $5m the year before.

The company puts the great result down to a record volume of kiwifruit packed during the 12 months.

EastPack says it paid out $7.9m to transactor shareholders during the year, and investor shareholders also received a fully imputed dividend of 9.36 c/share, up from 5.04c/share in 2017.

EastPack chairman John Loughlin says 2018 was a record year for the company, with growers experiencing a great return and EastPack delivering high quality service and a robust financial performance on all sites.

“EastPack always has growers at heart, so we’re delighted to be able to celebrate a record year of growth in both production and revenues,” says Loughlin.

Earnings before interest, tax, depreciation, fair value adjustments and rebates of $41.8m were up from $29.9m in 2017.

EastPack chief executive Hamish Simson says during the 12 months, 41.1 million trays were packed across six sites in the Bay of Plenty region. Gold and Green varieties grew in volume in 2018.

Most of Prospa’s new clients have their orchard managed to ensure a consistent labour supply, and to deal with the increasing complexities of producing kiwifruit.  The Prospa team now covers 900ha in all growing areas, a 10% increase since 2017.

Simson says that EastPack’s strategy and competitive strength is to have sufficient capacity to pack fruit promptly when growers want their fruit harvested and packed.

“In Te Puke we’re constructing the first fully automated coolstore in the industry with the capacity to store 1.2 million trays.”