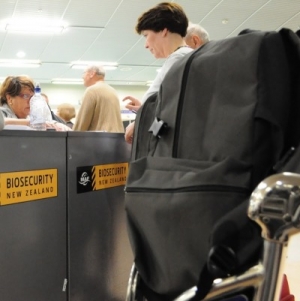 Biosecurity officials have reported the bizarre discovery of two massive ostrich eggs in the luggage of a passenger at Auckland airport.

A Ministry for Primary Industries quarantine inspector intercepted the undeclared eggs during a recent baggage search of a South African passport holder who had arrived from Melbourne.

The two whole eggs with yolk each weighed around 1.5kg. They were found loosely wrapped in newspaper.

The passenger was fined $400 and will face increased scrutiny by biosecurity officials if they make further flights to New Zealand, says operational support coordinator Steve Gay.
He says the eggs posed a high biosecurity risk to New Zealand.

"There was the chance they could be carrying avian diseases. And we can't write off the idea that the eggs were going to be used for breeding," he says.

"It beggars belief that the passenger could possibly forget to declare something so obvious in size and so risky for our primary sector and environment.

"Air passengers pass more than 30 signs asking them to declare or dispose risk items before they even speak to a quarantine inspector."