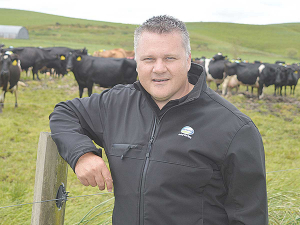 On Sunday, November 10 about 7000 people flocked to 13 farms NZ-wide to see how a typical dairy farm operates.

Hurrell, who spent over two hours at Brad and Ellie Cockrell’s farm at Mercer, says he was a bit surprised by the uptake.

He told Rural News that all farms except one were sold out days before the event.

“It’s a bit hard to get more farms come on in the last minute. Given the overwhelming support, early indications are that we’re going to go bigger next year.”

Hurrell says it was great to see people given the opportunity to look at all aspects of dairy farming, to live and breathe the rural sector for a few hours.

While mingling with visitors at the Stewarts’ farm, Hurrell picked up questions on water quality and animal welfare.

He praised Brad Cockrell, a second generation farmer, for doing a great job on the farm.

The Cockerill’s milk 920 cows and are both passionate about caring for their animals and looking after the land.

Brad says they see themselves as the custodians of the land, rather than the owners.

“As a New Zealander and father of four, I’m committed to looking after the land and waterways on their farm.”

The Cockerill’s have planted several thousand natives across the farm in addition to a protected original bush block, next to the farm dairy.

A Fonterra spokesman says it planned for 14 farms to open, but poor weather forced cancellation of the Tauranga event.

“We know the wet weather across New Zealand would’ve put off a few people, but in the end we still had a good turnout with around 7000 people attending the 13 farms,” he told Rural News.

“The whole country cares about what’s happening with our environment, including us.

Fonterra says Open Gates is showing communities what its farmers are doing to help look after the land, waterways and their animals, while also providing a fun family day out on farm.

“Visitors got to see where their milk comes from, chat to our farmers about work being done on farm and sample some of our delicious products.”