Online livestock sales the way of the future 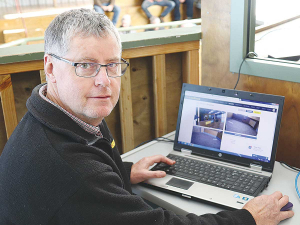 Bill Sweeney, general manager of NZ Farmers Livestock, says his company has been running online sales now for several months and their popularity is growing.

Online stock sales are not just a COVID-19 thing, but the way of the future.

That’s the view of Bill Sweeney, general manager of NZ Farmers Livestock, whose company has been running online sales now for several months.

Sweeney says they started looking at the idea before the arrival of COVID-19 when they launched a new website, but rapidly accelerated the process when pandemic arrived in New Zealand.

The present system could be described as a low technology approach – mixing a web based system with some hands-on work at an actual sale. Rural News saw this in action at the Rongotea saleyards a couple of months ago.

The sale is live streamed from four cameras around the inside sale ring.

“People register in advance and then link on to the website and can place a bid online.

“We have a person monitoring the website and when a bid is made, that person signals the bid to the auctioneer,” Sweeny explains.

“There is about a four or five second delay in the system, but the incoming bids are put up on the screen as they come to hand so that the person bidding online is not disadvantaged.”

He says the online system allows people who are either too far away from the saleyards, or who simply don’t want to come, to participate and bid on certain animals. For some, it means that they may only have to spend about 20 minutes at the sale.

“From our point of view, this is a great way of supporting our clients with the sale of their cattle.

“The more buyers we can get at a sale, be it physically or online, that is better for our vendor,” Sweeney told Rural News.

“We’ve had guys from the South Island buying cows from clearing sales in the North Island.

“They said they wouldn’t have gone to the sale but they were definitely interested in the cows on sale, so that was a win-win for both parties.”

As well as running the online sales at their various yards in the North Island, NZ Farmers Livestock have conducted clearing sales on farm and in some remote locations.

Sweeney says this is a complex process from a technology perspective.

“We’ve done this in a couple of remote places and it worked well.

“It is a challenge at the moment, but as the technology and coverage improve that will make it easier.”

Sweeney says in some instances where there has been no coverage, they have gone out beforehand and videoed the animals and played this on the web and run it as a normal sale.

He describes this system as simply a virtual sale.

Bill Sweeney says given the success of the online system to date, they are planning a major upgrade to increase the use of online selling.

He says at a sale in the future they will take photos of all the cattle in advance – or at the very least just before the sale begins – so that farmers can see the offering.

According to Sweeney, dairy farmers – as opposed to sheep and beef farmers – are the ones that seem to have embraced the online system, which he says surprises him a bit. He adds that dairy clearing sales can also be more complex, but they have processes in place to deal with that.

They are also looking to livestream sheep sales, with a person with a camera roaming the pens, enabling people to bid on these stock.

At present sales are quiet, but in a few weeks’ time the first of the weaner sales will begin, followed by the store market and the clearing sales and this will run through well into December.

Sweeney says during this busy period, online sales will effectively enable people to be at three sales in one day wherever they are in the country.