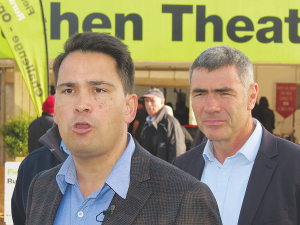 “National’s team of experienced rural MPs have come up with a series of ideas and proposals that we think can address these issues and we are excited to hear any feedback.”

“We also address important areas neglected by the coalition Government, such as water storage, biotechnology and food safety.”

Bridges claims the document is part of the biggest policy development process by a parliamentary opposition in over a decade.

“National holds every rural seat in Parliament except one and we’re proud to represent rural New Zealand. We’re working hard to ensure we’re ready to govern in 2020, should we have the opportunity.”

He says it would be an avenue for skilled and experienced migrants seeking residence and a future in NZ.

“It would work alongside other National initiatives such as supporting vocational education and agricultural training, extending the Recognised Seasonal Employer scheme and promoting the sector as an attractive career prospect for young people.”

“National wants to pilot mobile rural health clinics serviced by health practitioners which will regularly travel to remote rural communities where they can provide general health check-ups and mental health support for locals.”

Meanwhile, National is also proposing to increase the penalties for breaching biosecurity rules at the border to protect against incursions of pests and diseases, says biosecurity spokesman Nathan Guy.

“We want to toughen up on people bringing in items which could put our biosecurity at risk. This would mean increasing fines from the current $400 to $1000 for people found to have risk materials, and giving Ministry for Primary Industry officials the power to immediately deport people found to be knowingly concealing risk items.”