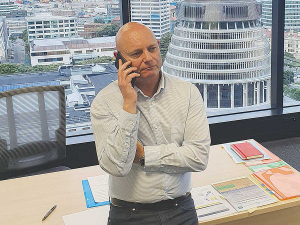 MPI director general Ray Smith says the primary sector has worked individually and collectively to find solutions for working in the COVID-19 environment.

Director general Ray Smith says these calls are coming in via their 0800 number and MPI is providing a lot of support in that area. He says the volume of calls is so great that, on occasions, it has taken longer than they would like to get back to people.

“We have continued to run our verification process. Several thousand businesses have either been contacted by phone or visited directly as we take a look at the safety practices that they have put in place,” Smith told Rural News.

“One thing we can say is that everybody has taken a step up and treated this seriously on behalf of their employees, the families of those employees and the communities that those people live in to make sure that they don’t contribute to any disease spread.”

Smith says employers know that their staff may be going home to family members who might be more vulnerable, and they don’t want them to bring the disease back from the workplace.

“We have been delighted with what we have seen so far.”

He says it’s been terrific to see that all the key institutions in the primary sector, such as the likes of Fonterra and the various industry good organisations,  are working individually and collectively to find solutions for working in the COVID-19 environment and making a point of sharing this information with each other

“That’s tremendous for NZ and if we keep doing that, the country will come out of this in a very strong position. We have got the ability to turn something, which is pretty terrible into something positive,” he says.

Smith says he’s pretty proud of the way the MPI staff are going at the moment given the challenges they face.

He says his staff have spent a lot of time talking to business, industry and local government leaders to understand their needs and what support MPI can give them. Smith says for many rural areas the drought and the flow-on effects of are worrying for many regional communities.

“We have been working hard to establish good feed budgeting systems for farmers who are struggling and are not quite sure where to turn to next.”

Smith says MPI have been referring these farmers to DairyNZ and Beef+LambNZ where someone will talk to them and help them with a feed budget. He says they have also been giving advice to farmers on animal welfare issues.

“A lot of work is being done with the meat industry to make sure we head off problems in the future in what are quite uncertain times,” he told Rural News. “What I observe is that everyone across the industry, including MPI, are talking on a regular basis and offering support so that nobody feels like they have to do it on their own.”