Milk price on the rise 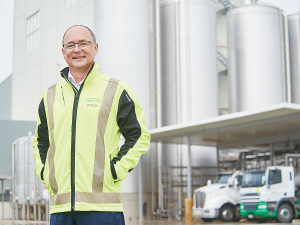 The country's second largest milk processor is lifting two of its forecast milk price settlements on the back of rising whole milk powder prices.

Open Country Dairy suppliers will now get $8.10 to $8.40/kgMS for milk supplied between June and September - a 30c lift from the previous month's forecast.

OCD suppliers get an advance rate every month and are paid in full four times during the year.

Between June and September, they have received an advance rate ranging between $5.30 to $5.45/kgMS with full payment made next month.

OCD chief executive Steve Koekemoer told suppliers that the business is performing extremely well and expects the company to once again exceed its forecast payouts.

"We have made gains with foreign exchange rate and we got the benefit of the recent upswing in WMP prices with some of our sales contracts linked to market pricing.

"The upside will continue to as we move through the peak."

This month's first Global Dairy Trade auction recorded a flat result after several rises in prices. WMP prices, used as a benchmark to set the farmgate milk price, have lifted by around 5% since August and remain well above long-run averages.

Koekemoer notes that while the most recent GDT results wer reasonably flat, it's encouraging to see Southeast Asia and the Middle East continuing to pick up the China slack.

"With milk supply in NZ falling below prior years' numbers in August, I anticipate prices to hold relatively steady as we move through the peak."

His sentiment is shared by banks, with Westpac upgrading its 2021-22 farmgate milk price forecast by 75 cents to $8.50/kgMS.

Meanwhile, Fonterra is sticking with a wide ranging milk price forecast - between $7.25 and $8.75/kgMS with a midpoint of $8.

Westpac senior agri economist Nathan Penny says the key catalyst for the forecast revision is the significant downgrade to NZ's production forecast for the season.

"We now expect New Zealand production to fall this season, and along with soft production in other key dairy producers, we expect weak global supply to underpin global dairy prices at or around current high levels for at least the rest of year."

He expects NZ milk production to fall by 1% compared to last season, a change from its previous prediction of a 1% rise.

"New Zealand production has started the season on the back foot," says Penny.

ANZ is also thinking along similar lines. Last week it revised up its farmgate milk price by 50c to $8.20/kgMS.

Agricultural economist Susan Kilsby says the NZ dollar has not appreciated quite as quickly as initially expected, and a relatively large portion of currency season, reducing the risk of a stronger NZ dollar significantly eroding farmgate returns.

ASB economist Nat Keall believes not too much should be read into WMP prices dipping 0.4% in the latest GDT auction to US$3,749/metric tonne.

"Given the current strength in prices, anything other than a sharpish decline at each auction continues to imply a solid farmgate price for the season," he says.

ASB is sticking to its forecast milk price of $8.20/kgMS.

Keall notes that the overall GDT price index remains up around 30-40% on the same point in the last three dairy seasons.

He agrees that milk supply could be tight in the coming months.

"Production data is increasingly pointing to tighter supply over the remainder of the season," he says.

The country's second largest milk processor says it is on track to pay a record milk price to farmer suppliers this season.

How high will they go?

With dairy prices on the rise, how far can Fonterra go with its forecast milk price rises this season?

A new record milk price for this season has been forecast as dairy products fetch higher on the back of strong demand and softening supply.