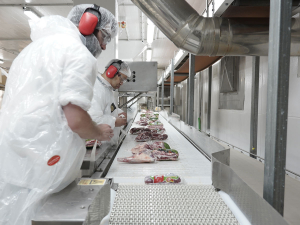 The Meat Industry Association says bureaucratic barriers from Immigration NZ have got in the way of getting sufficient halal butchers into New Zealand.

The Meat Industry Association (MIA) says it's facing bureaucratic barriers from Immigration NZ as it tries to get sufficient halal butchers for the coming season.

In its just released annual report, the MIA says there simply aren't enough Muslim butchers in the regions where the meat processing plants are based to do the job. Therefore migrant labour is essential. It adds that when the current visas for overseas halal butchers in NZ run out, the industry will face a crunch point.

The MIA wants the Government to create a special work visa or halal butchers but has yet to get a response to this request.

Chief executive Sirma Karapeeva says they have a small window of opportunity to sort this out and a final solution has still to be crafted.

"For meat processors this would be one of the top issues," Karapeeva told Rural News. "It's about getting the labour settings right and having enough people to process products and value-add."

She says this is closely followed by having enough stock to process.

"This, of course, links up to the climate change and environmental issues that our farmer colleagues are working through at the moment."

Karapeeva says climate change is huge for the red meat sector because there is still a lot of work to be done and there are some very big issues that need to be resolved.

"This is around the pricing of emissions and what would work in a way that incentivises the reduction of emissions, while not undermining the profitability and productivity of farms."

Karapeeva says dealing with this requires some complex thinking and work.

She adds that consultation processes currently being undertaken in the environmental space are "really intense and disjointed".

Karapeeva doesn't believe the processes have really been thought through and says unless you're intimately involved it can be very confusing.

"I get the sense the different groups and organisations involved in these changes are pushing their own agenda," she says. "They are consulting with the same people but not necessarily understanding the connectivity between the various pieces of policy that are being proposed and how the package will impact on the farming community."

Qualified overseas vets are giving up on plans to work in New Zealand because they cannot secure MIQ spots.