Many heed call for banking reform 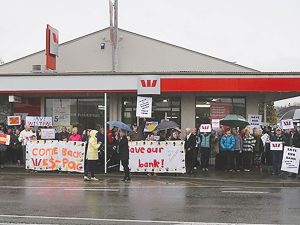 Support is growing from farmers all around New Zealand for a petition currently before Parliament for a select committee inquiry into banks’ conduct.

This follows a story that ran in Rural News on March 19, reporting on former Marlborough vineyard holder Lyn Berry, who blames the actions of a bank for the loss of her vineyard. Berry started the petition and wants the inquiry to look at introducing laws to level the power imbalance between banks and farmers.

Berry claims she lost her property because of unreasonable decisions made by her bank and is now reduced to living in a rented property in Wellington and relying on NZ Super to ‘scrape by’.

Her petition has the support of long-time banking campaigner Gray Eatwell, who has fought for banking law reform since losing his farm 20 years ago and has even written a book on the subject. One of the farmers featured in Eatwell’s book was the late, great All Black legend Colin Meads who was caught up in interest rate swap loans about the same time.

Berry and Eatwell are hoping for changes in the NZ banking industry similar to those now happening in Australia following the recent Royal Commission into Misconduct in the Banking, Superannuation and Financial Services Industry.

Australia looks set to overhaul its farm debt mediation schemes to create a national scheme with big penalties for banks that try to avoid it, and to put an onus on banks to offer mediation quickly.

In his final report, commission chairman Kenneth Hayne said banks often treated mediation as nothing more than a step required in the process of issuing a final demand on farmers. He recommended that banks should ensure distressed farm loans are only managed by experienced agricultural bankers, and that farmers are offered farm debt mediation as soon as a loan is classified as distressed.

Hayne also suggests that banks should manage every distressed loan on the principle that working it out would be the best outcome for bank and borrower and enforcement the worst.

“The outcome of the Australian Banking Commission saw banks ordered to give restitution to businesses and farms they treated unfairly,” Berry told Rural News. “We want the findings of the Australian inquiry to be applied to NZ banks as they are the same banks.”

Currently in Australia and Canada, banks must engage in mediation with farmers before calling in loans and putting farmers off their land. The process is designed to give farmers a voice, and to force banks to engage with them via mediation conducted by a neutral third party.

A farm debt mediation bill modelled on the schemes in Australia and Canada and supported by Government and National MPs is expected to go to the Cabinet in May.

Meanwhile, several farmers have contacted Rural News seeking more information on Berry’s petition since reading her story in the March 19 issue. Many of these farmers have shared similar stories and claim ill treatment by their banks.

The petition now has at least 100 signatories. It closes on May 31, after which Parliament will decide if it will hold an inquiry or not.