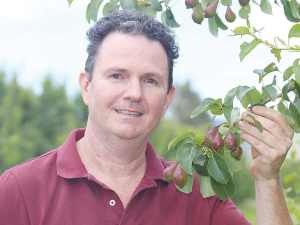 A new variety called Piqa Boo is now being grown for both the domestic and local market. It’s hoped that this, and other new varieties of pears, can lead to the renaissance of what was once a popular fruit.

The term apples and pears is used in horticultural statistics. However, in volume terms, apples account for about 96% of total value and pears a mere 4%.

The steady decline of the pear – to the benefit of apples – has been happening over many decades and is due mainly to the innovation in breeding new varieties of apples and virtually nothing being done in regard to pears.

In the early days, fruit growing was something of a cottage industry. But after years of producer boards and deregulation in the early 2000’s led to major changes.

Today there are very few small-scale orchards. Paul Paynter is a director and group general manager of a large and well-established Hawkes Bay orchard operation, Johnny Appleseed. Paynter says in the apple industry there were 1800 operators 20 years ago, but now that’s been whittled down to about 250.

“In respect of pears, back in the 1950s, my grandfather grew more pears than apples on this orchard,” he explains. “Today we have about 30 acres of pears and 500 acres of apples and 180 acres of stone fruit – which includes apricots, nectarines, peaches, plums and cherries.”

A challenge for Paynter and the family-owned business is the international market. But he says with the advent of new planting of Piqa Boo, export is now a key target. He’s excited about how much some Asian markets for quality fruit and how fast one can grow these markets.

This aside, they have a significant focus on the domestic market where they feel they can have more control of their own destiny. They invest heavily in building relationships with supermarkets and employ three staff whose job is it is to makes things work in store for them and the supermarkets. Paynter’s father is also on the road and last year visited more than 200 stores to ensure produce managers understand all about the product.

“In some cases, there is a lack of knowledge about fruit, so we take it upon ourselves to support produce managers, some of whom are relatively new to the job,” Paynter says.

He points to the innovation that has taken place with apples and kiwifruit as examples of what is possible.

Paynter says the varieties of pears on the market are very old, traditional ones and – in many cases – require ripening after they have been bought in the supermarket.

“They are not ready to eat like other fruits,” he says.

A labour of love

Paul Paynter employs 350 FTE’s, but at the peak of the season up to 700 people can be working on various tasks around the business.

Labour, he says, remains one of the biggest challenges.

“It’s really hard to get people now and we are scraping the bottom of the barrel. We have vans going into WINZ offices in Napier and Hastings every day at the peak of the season to pick up anyone who wants work,” Paynter told Hort News.

“We have had prisoner rehabilitation programmes and all sorts of things to get labour, but it is not available on the scale that that you need. This comes at the same time as horticulture has boomed with extra plantings,” he adds.

“Once upon a time we had queues of 100 people wanting jobs. But now days, if you advertise no one turns up. The world has definitely changed.”

Paynter says mechanical harvesting is often touted as the answer. Technology already plays a part in the sector with things such as GPS on tractors, post-harvest sorting and packaging – as well as elevated working platforms for harvesting fruit instead of ladders.

He says all of these are great and save money and time. But Paynter warns that the actual mechanical harvesting of fruit is at least a decade away. He believes the challenge with technology is that it needs smart people to run and maintain it.

New Zealand olive yields can be more than doubled by using fruit tree management techniques instead of more traditional methods.