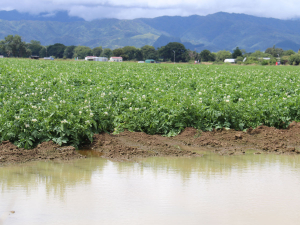 Commercial growers in the Horowhenua region in the lower North Island are facing significant crop losses as a result of persistent and devastating rains over the last two weeks.

It’s estimated that 300ml of rain have fallen – three times the normal rainfall for December.

Tararua Vegetable Growers Association president Terry Olsen says it’s not uncommon to have a wet December but he’s never seen anything like this.

The worst hit area appears to be Levin and south of the rural township. Crops such as lettuces and brassicas can be seen surrounded by water - as are potato crops. There are predictions of some vegetables being in short supply both now and in the future because growers can’t get on the wet paddocks to sow new seedlings

One strawberry grower says he faces the prospect of losing about half his crop due to the rains. When visited by Rural News he was trying to salvage some of his crop by drying it out, and then pointed to buckets of strawberries that are having to be thrown out.

Terry Olsen says there’s been a complete lack of the sunshine needed to grow crops and to dry out the land.

“The ground is so sodden that you can’t get out a tractor and even when the rain stops it’s a matter of waiting until it is dry enough to get machinery out on the land,” he says.

Olsen is a potato grower and says some of his and other farmers’ crop will be lost and just rot in the ground. He says the problem is showing no sign of getting better with more rain forecast for the coming days.

Olsen says at this stage it’s too hard to quantify the losses and says this won’t be possible at least until the rain stops.

In addition to the crops being affected, the rain has also caused trees to fall on many farms and other infrastructure on farms has also been affected.

It will take between six to eight months for commercial growers in the Horowhenua region to fully recover from the disastrous heavy rains that hit the region in the weeks leading up to Christmas.

Facial eczema (FE) has hit Horowhenua much earlier than normal due to lots of rain and high temperatures.