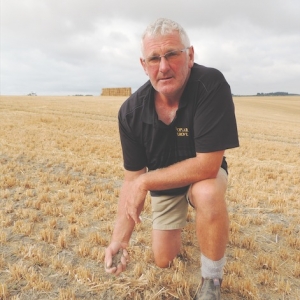 The grower of what’s probably a new world record for barley yield says a switch to a reduced tillage system five years ago laid the foundations for this summer’s success.

From there it’s been a case of getting a good season, with the right variety grown to maximise yield potential and minimise yield loss to pests and diseases.

“Every day the crop is in the ground there’s something trying to take the yield off you,” notes Warren Darling who harvested 13.8t/ha of winter barley off an irrigated 11.6ha block just south of Timaru on January 23.

On the day the record attempt was witnessed by a justice of the peace with every load put over a certified weighbridge and analysed by SGS. The aim was to meet the requirements of Guinness World Records and beat the long-standing record of 12.2t/ha off 21.29ha, set in the Scottish Borders in 1989.

“We set it up from planting in March to have a crack at the World Record, but it was only in the last three months that we knew we were on track and only 10 days prior, when we took a last test cut to evaluate the yield, that we knew we’d be on the plus side of the record,” Darling told Rural News.

The record attempt was supported by a team of commercial companies, including Carr Group subsidiary Canterbury Seed which markets Blackman Agriculture (BA) cereal varieties in New Zealand through the Exclusive Grain Group (EGC).

Darling’s EGC membership gave him access to BA’s true winter barley variety 776 and in 2014 he harvested 11.5t/ha of it across the farm, which in due course spurred this season’s record attempt.

The record block was irrigated with 15mm/week during November and December but Darling plays down its role in the record.

“The rest of our barley this year has done 12t/ha and only 30% of it was irrigated.”

More important was establishment in March with 60kg/ha of Raxil Poncho treated seed into a seedbed prepared with two passes of a Great Plains Simba SL500 cultivator to incorporate oilseed rape stubble, create a stale seedbed, and remove any barriers to rooting.

“It was all in before the rain in early April.”

Having a true winter variety with stiffer straw and superior disease resistance to spring types is important for such early sowing, he believes.

Season and soil behind success

“Too often I see farmers beat the living daylights out of [soil]. Warren’s doing one or two passes and in. He’s keeping the soil alive and it has very good fertility… The roots are feeding off the whole profile. On some farms they’ve just got the top six inches, not the best part of two feet.”

Spring started with soils at field capacity too so in clays like Darling’s Claremont series ground with high water holding capacity and no barrier to rooting there was a good reserve of water for crops to draw on. Meanwhile the dry conditions above ground minimised disease pressure.

Wearing parts for soil engaging implements are a hefty cost for any farmer or contractor, so selection should be based on factors such as prevailing conditions and areas to be covered.