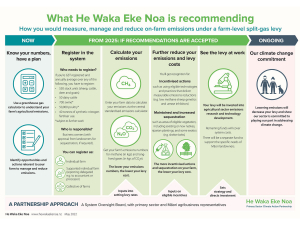 His warning comes following the release of He Waka Eke Noa (HWEN), the NZ agricultural sector's proposal to government on how to price farm emissions.

"Leakage risk is particularly high in agriculture. Nobody else (in the world) puts a price on agricultural emissions," Crampton explains.

"If emissions pricing results in fewer cows and sheep on New Zealand pastures and more in feedlots overseas instead, global emissions could wind up going up rather than down."

As he puts it, "the climate doesn't care where a cow burps".

However, Crampton add that pricing greenhouse gas emissions in agriculture is important and any way of doing it is going to have problems.

He says the NZ agricultural sector's proposed solution - via HWEN - has problems, but concedes it has a "thorny mess" to deal with.

Crampton explains that, in a perfect world, every country would price all greenhouse gas emissions - whether industrial or agricultural. He says every pricing regime brings risk of 'leakage', where companies simply shift high-emission production to places where emissions are not priced.

"The Emissions Trading Scheme provides free carbon credits to businesses in industries with substantial leakage risk," he adds. "So long as companies can profit by reducing their emissions and selling off their allocated credits, they have a strong incentive to reduce their emissions.

"If their emissions increase above their free allocation, they must buy carbon credits like everyone else, and face a price that's now close to $80 per tonne emitted."

Crampton believes this kind of allocation regime reduces the risk of carbon leakage, while maintaining incentives to reduce emissions.

"There are ways of improving on how New Zealand does it, but the basic principle is sound."

In regard to agriculture emissions, he says any carbon pricing scheme has to recognise that short-lived gases like methane need to be treated differently from long-term gases like carbon dioxide - which HWEN does.

However, Crampton believes the HWEN proposal to handle the problem with a very low price on methane "does not seem like a first-best or even second-best".

"Alternatives might have applied a higher methane fee while providing rebates for products exported to places where the competition does not face a methane price.

"A scheme could be designed to maintain incentives to reduce emissions - but it would not be simple."

But he says the HWEN proposal does put a price on methane, which he claims is a start.

"And a start can be a good thing when nobody else has yet even tried."

He Waka Eke Noa (HWEN) chair Michael Ahie says the approach put forward by the primary sector climate change action partnership in its report to the Government on how to deal with on-farm emissions is the best option.