Is robotic harvesting the future? 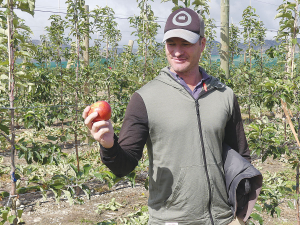 Ngāi Tahu Farming commercial development manager Ben Giesen with one of the first apples from a trial orchard at Balmoral, in the Culverden basin. Photo: Rural News Group.

Their plans to diversify into horticulture are surging ahead on the strength of excellent results from a trial orchard near Culverden, North Canterbury.

“It’s big money, but if you get it right... some of these varieties here now are growing up to 100 tonne/ha so they can produce big volumes,” commercial development manager Ben Giesen said.

The initial Plant and Food study said Balmoral’s climate was very close to that of the Waitaki Valley. But in his view some of that data was influenced by the forest, much of it now gone.

Ngāi Tahu Farming has since installed four of its own weather stations, providing what he believes is more accurate and relevant data.

The remaining exotic forest at Balmoral is now owned by Rayonier Matariki, who will harvest the trees as they mature. The land will then return to Ngāi Tahu to decide what to do with it. It’s not clear how much will eventually be orchards, but Giesen says putting some back into pine forests is also “reasonably attractive”.

“From a land utilisation point of view it’s just a drop, but it’s a point of difference.

“It’s diversification. We’ll be giving ourselves another income stream as well as another farming practice, so that’s probably the more exciting thing.”